Youssou N'Dour in the spotlight at Brooklyn Academy of Music on June 5. (Photos by SPM)

It’s rare to see Youssou N’Dour onstage without finding the audience dancing, but that’s what happened at first at the Brooklyn Academy of Music last night when the Senegalese superstar and his band performed on the opening night of the Muslim Voices: Arts & Ideas festival.

The evening started off a bit slowly, with speeches from the the likes of Brooklyn Borough President Marty Markowitz and NYC Mayor Michael Bloomberg, followed by Quranic recitations and an ensemble playing a gentle Salaam Suite.

But things always get amped up when Youssou takes the stage.

Ultimately, last night, that came to pass — ever so slowly. With a bit of prompting, a few members of the audience came to dance in front to the infectious guitar lines produce by Jimi Mbaye and Omar Sow, a few jumped onstage (to the consternation of the ushers) and one even tossed some cash at Youssou as a tip.

Finally, after a lot of prompting, the beat got to the audience and the house vibrated from all the dancing.

I never dreamed it would take that much prompting.

Youssou N’Dour returns to the BAM stage tonight, for a 60-minute performance following the screening of his 2008 film, I Bring What I Love: Youssou N’Dour. 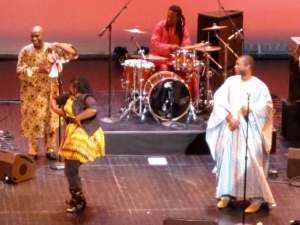 Youssou watches another dancer from the audience.

Another dancer from the audience.

Youssou N'Dour and his band.

This entry was posted in Music, World Music. Bookmark the permalink.