Not so ridiculous at all

The cast of The Most Ridiculous Thing You Ever Hoid, from left: Christopher Milone, Clifton Lewis, Amy Edelstein, James Lesko, Margaret Young and Robert Kopil.

The Most Ridiculous Thing You Ever Hoid probably isn’t. But it may well be one of the most entertaining things you ever hoid — that is, if you can snag a ticket to one of the three world-premiere performances of the topical and zany musical this weekend.

When Jim Beckerman and Andy Seiler, two writers who are longtime friends, began work on the  musical, based on the short-lived 1932 Marx Bros. radio series, “Flywheel, Shyster and Flywheel,” their idea was just to put on a show — not a musical.

“I thought it’d be fun to add a song or two to the show,” says Jim, who plays a mean New Orleans-style piano when he’s not writing for The Record, the North Jersey daily newspaper. “Those came out pretty well, so we added another song or two, until it turned into a musical.”

And based on the recording of the songs that will be available for purchase at the shows, it’s quite a delightful musical courtroom caper. (Full disclosure here: Jim Beckerman is a friend and a onetime journalistic colleague of mine who’s extremely talented as a writer and musician.)

The songs, which Jim completed after Andy became fully disabled some time ago (Fred Wemyss helped with the show’s book.), are true to the spirit of the crazy Marx Brothers era.  But they also have a timeliness that original Marx Brothers material lacks — for obvious reasons.

The musical is staged in a radio studio setting, but isn’t intended as static a radio play. It’s  a staged musical. And despite the setting and the familiar references, it’s not a period piece. “We didn’t want it to become a nostalgic look at the golden days of radio,” says Jim.

Although it’s based on the Marx Brothers, and their characters are aped onstage, the names Groucho, Harpo and Chico are never actually mentioned in the show. Instead, you have lawyer William Tecumseh Flywheel (the Groucho figure), his larcenous assistant Ravelli (Chico) and the sound-effects department (the silent Harpo).

The creative team started writing the piece when conflict in the Middle East was an especially hot topic. And they brought that topic into the narrative of the show, with songs like the amusing “Oy-ull,” which presents petroleum as an unlimited source of clean energy, while tipping a musical hat to the truth with lines like “we’re creating a whole new climate for motoring enjoyment.” 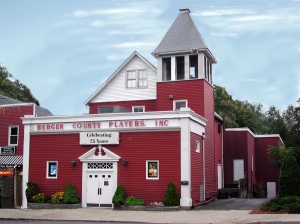 Suffice it to say that the story involves the apparent theft of a diamond, the trial of the alleged jewel thief, and the recovery of the sparkler in the most unlikely place.

This entry was posted in Music, Theater. Bookmark the permalink.

One response to “Not so ridiculous at all”