Okay, my monthlong grand jury stint is killing me. It’s making me lose track of things. I am so off balance that I discovered only today that it was announced 11 days ago that one of my favorite actors in the world, the great Colman Domingo, will be taking over from Orlando Jones in the title role of The Wiz for the last six performances (June 29-July 5) of the Encores! Summer Stars revival at New York City Center.

Better late than never, eh? For a full report from Broadwayworld.com on what the former Passing Strange star is up to in Encores!, click here. 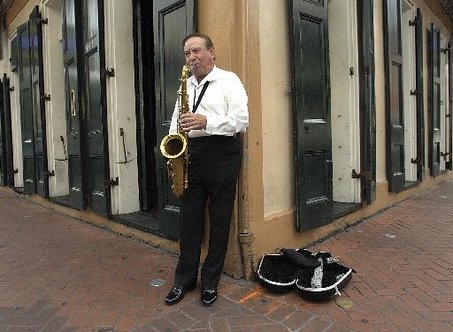 Blogger Jerry DeMarco, a friend and former colleague of mine, usually writes about crime and criminals in Northern New Jersey. But he took some time out from that yesterday to write about another love of his — music — when he noted the passing of saxophone great Sam Butera. Here’s a taste of Jerry’s tribute:

They buried Sam Butera in Las Vegas yesterday, giving Gabriel the one saxophonist who could make a heavenly band swing like the devil. Darkly handsome, Uncle Sam died earlier this month — a footnote for many in the musical world but a noted loss for anyone who knew where rock and roll really began.

Butera, 81, tenor played sax behind Louis Prima, a combination rivaled in our generation only by The Boss and the Big Man. He helped make Big Bad Voodoo Daddy, Royal Crown Revue, and the latest incarnation of Brian Setzer possible.

If you don’t believe me, go to YouTube or dig up few Prima classics: “Buona Sera,” “Jump, Jive An’ Wail,” or “5 Months, Two Weeks, Two Days.” Listen, in particular, especially to “Oh, Marie,” where Prima scats in English and Italian — and Butera matches him note-for-note.

What I did on my summer vacation — Friedlander style

Erik Friedlander probably didn’t realize that his childhood was so different than most kids his age. Spending 2 1/2 months every summer traveling around the United States in a camper atop a 1966 Chevrolet pickup truck was the norm. After all, it was his dad’s job, and dad liked to take the family on the road while he worked.

But Erik’s dad isn’t like most dads. He’s photographer Lee Friedlander, and every summer, like clockwork, he took his children, Erik and Anna, and wife Maria on the road while he shot photos on assignment, worked at teaching gigs and made his own images on the road.

Erik’s parents told him the experiences were “enriching,” he explained last night to an audience at The Stone, John Zorn‘s music venue in NYC’s Lower East Side. While Erik didn’t get that while he was a kid, he said he finally understands and connects with the idea. It proved so enriching that it has become the theme of Block Ice and Propane, the new solo show Erik is developing in conjunction with experimental filmmaker Bill Morrison.

Erik and Bill was road-testing the show at The Stone last night. It grew out of Erik’s 2007 show at Joe’s Pub, where he played the music of his then-new album, Block Ice and Propane, while projecting a few of the images that illustrated things that inspired the pieces. But this new version has been expanded with additional tunes and more extensive use of family photos (many taken by Erik’s father, and some by his mother) and new films by Bill, who specializes in working with musicians.

Erik Friedlander plucks the cello with one of his father's photos projected in the background.

In this show, which Bill directs, Erik plays each tune with great intensity, changing the tuning of his early 20th Century instrument against its creaking protestations.

Here’s Erik’s description of his show:

I will be performing a new show this coming Summer and Fall starting August 1 at The Hopkins Center for Arts in Dartmouth. The new show, which will be directed by film-maker Bill Morrison, is an expansion of the Block Ice & Propane concert I experimented with first at Joe’s Pub in New York. At that performance I projected a few images from the family trips that inspired the music.

Bill and I will be workshopping ideas here in New York and then up at Dartmouth. Some of these ideas include using more projected images, a set, as well as the premiere of new pieces to go with the new program. The Block Ice show will be presented at The Hop in Dartmouth, PICA TBA festival in Portland, Ore., The Walker Arts Center in Minneapolis and the Wexner Art Center in Ohio.

There were bumps and missed cues in last night’s run-through, and Erik cautioned the capacity crowd in the airless former that they were witnessing a work in progress. But on the whole, the show was mesmerizing. While it’s only a start, the idea holds great promise.

Erik Friedlander picks up the bow.