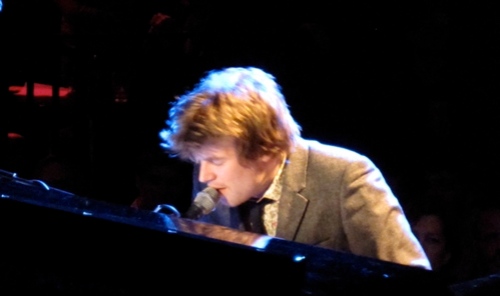 In part the surprise comes from the band’s constantly changing lineup of musicians. And there’s always surprise in Bartlett’s decliately fractured Doveman songs.

The show at (Le) Poisson Rouge last night was billed as “Doveman with Sam Amidon and members of The National.”

As it turned out, the unnamed members of The National (the Brooklyn art-rock band with which Bartlett sometimes plays) were guitarists Bryce Dessner and Aaron Dessner and drummer Bryan Devendorf — in other words, three-fifths of The National. But Thomas got help from even more players — Nico Muhly, Oren Bloedow of Elysian Fields, Sam and singer Dawn Landes —  to the point that he declared the ensemble the largest version of Doveman to ever appear onstage.

Doveman played a splendind set, mixing favorites like “Honey” with new songs from the upcoming album (click here for Doveman news from Brassland, the band’s record label). The band closed the set with pretty rocking cover of Tom Petty’s “Free Fallin’. The crowd, which was peppered with celebrities such as Josh Ritter and Justin Bond, reacted enthusiastically to every song.

For more on Doveman, plus videos from last night’s show, keep reading. END_OF_DOCUMENT_TOKEN_TO_BE_REPLACED

Here are a few shots, and a video, from Jonathan Richman‘s show on Wednesday night, June 17, at the Bowery Ballroom in NYC.

The energy level was distinctly different than the night before. Even Jonathan admitted toward the end of the show that something wasn’t right, something was missing. (Jonathan mixes up the set every  time he plays, and doesn’t use a set list.)

But he fixed it by playing “Springtime in New York” as his parting tune.

Here’s a video I shot of Jonathan performing “Girlfriend” at the show: