Holsapple and Stamey: Yes, The dB’s really are recording again!

While it holds out promise, it’s very much NOT a dB’s album. It’s a followup to Mavericks, the album the pair made 18 years ago.

Now Magnetmagazine.com, which Holsapple and Stamey are guest editing for a week, confirms what has been rumored for some time: The pair have really have begun recording again with The dB’s original bassist Gene Holder and drummer Will Rigby.

If there’s an album, a tour will certainly follow, right? Well, let’s not get ahead of ourselves. There’s no guarantee. But the guys do seem to enjoy playing live, so it seems likely.

This is not the first time that reunion-album news has popped up. And The dB’s have done a few reunion gigs here and there.

But given the direct involvement of Holsapple and Stamey in these reports, it seems pretty likely that we really will be hearing a dB’s album sooner rather than later. 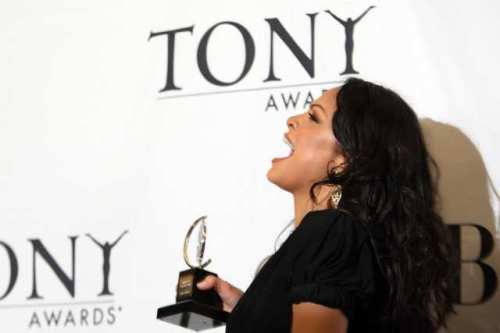 Karen Olivo exults in her win.

The voters have spoken and the results are in for the 2009 Tony Awards. It’s no surprise that Billy Elliot, The Musical blew away the competition, winning 10 of the 15 categories in which it was nominated, including Best Musical.

God of Carnage won the Best Play award, and tied for the second largest number of awards with 3 wins in 6 nominations.

It was all fairly predictable. So for me, the greatest moment  of the evening for me was seeing Karen Olivo pick up the only Tony granted to the revival of West Side Story. She won for Best Performance by a Featured Actress in a Musical for her portrayal of Anita in the classic Leonard Bernstein show.

Karen first grabbed my attention with her winning Off-Broadway turn as Vanessa in In the Heights, whose author, Lin-Manuel Miranda, translated some of West Side Story’s lyrics into Spanish for this production. She reprised the role when the show moved to Broadway.

Her acceptance speech was the most emotional and natural of the night:

“Thank you, Arthur, for believing in me and for giving me confidence when I didn’t have confidence,” Karen said, referring Arthur Laurents, who wrote the original book and directed this production. She broke down in tears before she could finish her speech. Olivo plays Anita, which has long been associated with Rita Moreno, who won an Oscar for her portrayal in the film. With her win, Karen captured an award that eluded her two Broadway predecessors in the role, Chita Rivera, in the 1957 original Broadway production  and Debbie Allen, in the 1979 revival.

“I am completely surprised,” she said of her win in an interview with Playbill.com in the press room. “I guess I read the wrong [Tony polls].” About playing  Anita, she said she likes “the full journey. I like that I start as one person, and I end as a different person. It’s kind of like the best workout.”

Although this isn’t the first time she had to dance onstage, Karen said that “the most rewarding thing is I’ve become a dancer. … This forced me to jump into an arena I wasn’t comfortable with. … That was hard, and I wanted to quit all the time, but because of that it made the entire experience richer.”

(Click here for an Orlando Sentinel background feature on Karen, who’s from Florida.)

It’s a little shocking that Rock of Ages, nominated for five awards, was shut out. It may be a jukebox piece, but the music is infectious and the performances are hard to resist as a guilty pleasure. However, the non-win has provided incredible exposure for the show, with video following star Constantine Maroulis‘ road to Broadway.

And I expected Hair, the tribal love musical revival that originated with The Public Theater, would win more than once, but at least it took a big one: Best Revival of a Musical. And the huge wave of people who came up to accept the award made the Radio City Music Hall set look like the stage at the end of Hair, when the audience is invited up to dance.

The Public Theater’s Oskar Eustis gave an acceptance speech that was quick but awesome. “If the theater is going to matter, it had to talk about things that matter to the people,” he said, adding a quick coda about equality while touching his ring finger.

Host Neil Patrick Harris was charming and delightful. His best moment onscreen was a not-so-subtle dig at one of this season’s Broadway controversies: TV actor Jeremy Piven‘s questionable departure from a revival of David Mamet‘s Speed-the-Plow.

Neil returned from one commercial break eating sushi. “This gives you so much energy,” he said with a wry smile. “You could do show after show, night after night.” Piven who sparked an uproar when he abruptly departed Speed-the-Plow by claiming he had gotten mercury poisoning from eating too much cheap sushi.

I’ll leave you with the winners after the jump. END_OF_DOCUMENT_TOKEN_TO_BE_REPLACED