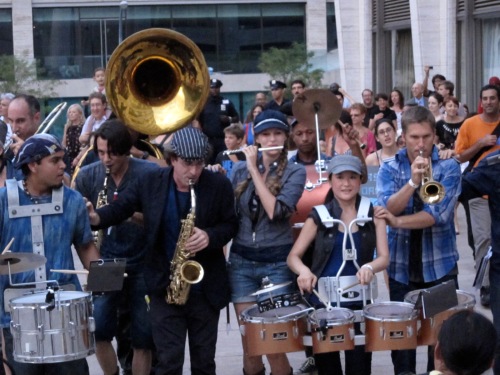 Asphalt Orchestra hits Lincoln Center Out of Doors this Sunday, July 28 with a brand-new project: a cover of the fan-favorite Pixies album Surfer Rosa.

The avant-garde marching band, a cocreation of LCOOD and Bang on a Can, is well known for its inventive reinvention of pop songs mixed with compositions written specifically for the costumed clan.

We are covering the classic Pixies record Surfer Rosa.
45 minutes of new music, Asphalt-style, choreographed and on stage.
All arranged by us in super-cool arrangements that use the original as a canvas for truly new versions of these tunes.

The free show starts at 6 p.m. with a set of Asphalt classics (Bjork, Zappa, Bregovic) on the plaza.

At 6:30, the music moves to the Damrosch Park Bandshell where Jacob Garchik’s “atheist gospel trombone project” The Heavens will be performed.

Asphalt plays next and then the evening’s headliner, Kronos Quartet, takes over.
Every second of music is free, with no ticket required and nobody hassling you for a  “donation” at the gate. Lincoln Center Out of Doors is one of those rare New York City institutions that truly is free — even free of guilt.

Make time for Lincoln Center Out Of Doors | ALL SHOWS FREE 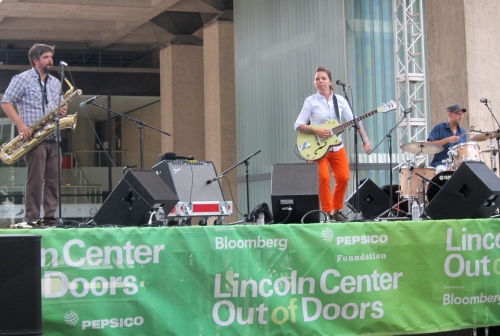 Singer-songwriter Erin McKeown was one of many performers at the 2012 Lincoln Center Out Of Doors festival. (Photo © 2012, Steven P. Marsh)

The flyer for Lincoln Center Out Of Doors arrived in my mailbox the other day. It reminded me that I hadn’t posted a single word about this free outdoor concert series yet.

So here goes. It’s a super linuep, as always, meticulously planned by Bill Bragin, director of public programming, and his amazing team.

Does that whet your appetite? If not, you’re probably reading the wrong blog.

The free outdoor shows start July 24 and run through Aug. 11 at various locations around the Lincoln Center campus on Manhattan’s Upper West Side.

Check out the whole lineup by clicking or tapping here (http://bit.ly/15MOo6P).

I hope to see you there.

Get ready for another amazing summer of free music and dance in Damrosch Park at Lincoln Center.

Lincoln Center Out of Doors kicks off July 27 and runs through Aug. 14. It’s all free and worth checking out.

Quest for the grail: Lincoln Center Out of Doors version of A Crimson Grail for 200 electric guitars to be released on Nonesuch 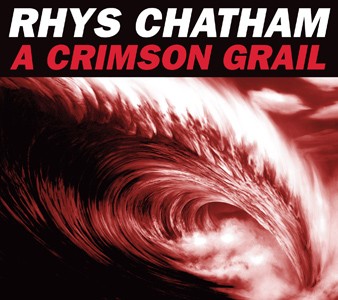 It’s been a long time coming. First it was rained out in 2008. Finally, after a great deal of additional planning and with the blessing of the weatherman, Ronen Givony of Wordless Music and Bill Bragin, director of public programming at Lincoln Center, managed to stage the NYC version of Rhys Chatham‘s A Crimson Grail for 200 Electric Guitars (Outdoor Version) at Lincoln Center Out of Doors last season. (Loyal Will You Miss Me When I’m Gone? readers will remember our coverage.)

Composer Rhys Chatham conducts his A Crimson Grail at Lincoln Center Out of Doors in 2009. (Copyright 2009, Steven P. Marsh)

On Sept. 14, a recording of that monumental performance is being released by Nonesuch. What a long, strange trip it’s been.

The magnificent, drone-based piece was mind-blowing in performance. Damrosch Park seemed ready to levitate from the amazing sonic pressure from the volunteer guitarists (plus 16 bassists and the sound of one hi-hat cymbal keeping the beat). I’ve heard the recording of the indoor Paris version of the piece, and while it’s amazing, it doesn’t quite do justice to the work. But I have high hopes that Nonesuch’s effort will top that.

Nonesuch Records releases A Crimson Grail—Rhys Chatham’s work for large electric guitar orchestra—on September 14, 2010. Written in 2005 as a commission for the city of Paris, A Crimson Grail premiered at the basilica of Sacré-Coeur. It was created to work with the specific architecture of the basilica, making use of its natural 15-second reverberation time. The musicians surrounded the audience, creating an antiphonal effect with the sound moving around the space from area to area. Scored for as many as four hundred guitarists, an orchestra of approximately 125 musicians performed the premiere, to great acclaim.

The Dallas Observer said of a recording of that concert, “Beautifully intricate and harmonically dense, A Crimson Grail is nearly ambient in tone while pursuing a beauty that never seems beyond its scope.” When Lincoln Center Out of Doors and Wordless Music invited Chatham to mount A Crimson Grail in New York at the Lincoln Center Out of Doors Festival, the composition had to be completely reworked for the acoustics of an exterior, non-reverberant setting. The Nonesuch recording captures the subsequent 2009 performance, in Lincoln Center’s Damrosch Park, with 200 electric guitars, 16 electric basses, 5 conductors, and percussion.

Rhys Chatham is a composer, guitarist, and trumpet player from Manhattan, currently living in Paris. He was the founder of the music program at The Kitchen in downtown Manhattan in 1971 and was its music director between 1971–73 and 1977–80. While at The Kitchen he was responsible for programming more than 250 concerts of living composers including the NEW MUSIC / NEW YORK Festival, which was the prototype upon which the NEW MUSIC AMERICA Festival was later based. Chatham studied under, was influenced by, or has collaborated with Maryanne Amacher, Don Cherry, Tony Conrad, Jon Hassell, Charlemagne Palestine, Eliane Radigue, Terry Riley, Frederic Rzewski, Morton Subotnick, Serge Tcherepnin, and La Monte Young, among many others.

Click through to the jump for Givoney’s personal account of the journey from an idea in 2007 to a reality n 2009.

END_OF_DOCUMENT_TOKEN_TO_BE_REPLACED 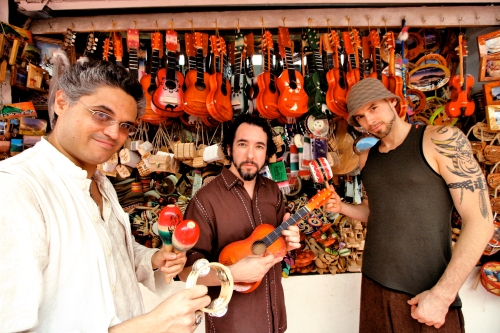 Looking for a way to enjoy the great outdoors today and get your dance on? Check out the free GlobeSonic Sound System dance party in Riverside Park today. The party starts on the early side, at 4 p.m., and runs until 11 on the Hudson River pier at 68th Street. This is the sixth season of GlobeSonic parties on the pier.

All you need to bring is your dancing shoes. And did I mention that admission is free?

We’ve been to GlobeSonic parties before, and they’re always a great mix of beat-heavy international tracks. Today will be our first time seeing GlobeSonic on the pier. It should be a wild party.

If the smash Broadway musical Fela! gave you the itch to hear more Afrobeat music, Lincoln Center’s Midsummer Night Swing lineup for this summer, announced today, will help you scratch it. Fela Kuti’s son Femi and his band Positive Force are scheduled to perform on July 12, with a a lesson in how to dance to the driving African beat taught by Maija Garcia, associate choreographer of the musical and a DJ set by Sahr Ngaujah, the actor who created the title role in Fela!

And if Afrobeat’s not your cup of tea, there are plenty of other styles of music and dance on offer during the 15 nights of performances at Lincoln Center’s Damrosch Park.

Bragin says: “The series offers an array of dance music styles including salsa, swing, disco, and tango.  For the first time this summer we are presenting a night of bhangra, the frenetic, hypnotic dance music from India by way of London and New York.  Famed DJ Rekha will spin bhangra and Bollywood beats with her special guest Red Baraat for a dance party like no other on July 8th.  Another highlight will be an appearance by Femi Kuti & Positive Force on July 12th.  Kuti, the son of Fela Anikulapo Kuti of FELA! on Broadway fame, extends the tradition with his contemporary Afrobeat sound.”

Tickets and passes are on sale now. Multi-evening Swing Passes are priced at $90 for six nights, and $160 for the full season.  Tickets for individual evening events are $17.

The Swing box office is located in the lobby of Avery Fisher Hall, Broadway and 65th Street. Tickets for individual events and passes can be purchased in advance or on the night of the event at a box office in Damrosch Park.  Tickets and passes can also be purchased through CenterCharge at (212) 721-6500, or online. Twitter users can follow Midsummer Night Swing  @LCSwing for ongoing news and updates.

Click through to the jump for more info and the full lineup: END_OF_DOCUMENT_TOKEN_TO_BE_REPLACED

The co-conspirators in Asphalt Orchestra.

As Will You Miss Me When I’m Gone? has been telling you, Asphalt Orchestra is makes its world premiere performance tomorrow night, the opening night of the Lincoln Center Out of Doors free music festival.

The off-kilter marching band has lots of interesting music on the program, but I’m particularly excited about the world premiere of a piece composed for the group by Stew and Heidi Rodewald, bandmates in The Negro Problem and the creative team behind the musical Passing Strange.

The New York Times did a piece on Stew and Heidi the other day that touched on their work for Asphalt Orchestra:

“These are not musicians who follow the rules,” said Bill Bragin, director of public programming at Lincoln Center, explaining their approach to music and hence their appeal.

The work that they created for the opening of the festival, “Carlton,” is an instrumental piece that Ms. Rodewald described recently in a phone interview from her home in Brooklyn as “pretty marching band-ish.” The work is part of the debut performance by the Asphalt Orchestra, an avant-garde marching band that is an outgrowth of the Bang on a Can music collective. The show, which will be performed on Wednesday and on Aug. 9, will be something of a spectacle, with contemporary dance choreography by Susan Marshall and costumes designed by Elizabeth Hope Clancy.

Of course the Asphalt Orchestra presentation is just one of dozens of amazing performances that will be taking place in the outdoor spaces of Lincoln Center through Aug. 23. Everything is free and no tickets are required. Click here for the full schedule.

Tagged Bang on a Can, Bill Bragin, Heidi Rodewald, Lincoln Center Out of Doors, Passing Strange, Stew, The Negro Problem