Throwback Thursday’s got nothing on Friday night’s lineup at Tarrytown Music Hall.

The acoustic duo of Paul Barrere and Fred Tackett of Little Feat, the legendary rootsy band that’s been going strong since 1969, opens the evening for New York’s own Orleans, which formed in Ithaca in 1972.

These artists will be doing a string of shows together in the coming weeks.

The Music Hall gig is “the first show we’ve ever done with them,” Barrere tells Will You Miss Me When I’m Gone? by phone from his Los Angeles-area home. “This’ll be an interesting soiree.”

“John Hall [Orleans’ frontman] and I have been swapping mp3s of different songs and stuff, and I think they’ll probably play a couple with us,” Barrere says. “Fred and I will do our usual acoustic opening set and we’ll get a little help on a couple of songs. And then they’ll do their set and we’ll probably jump in at the end of theirs. So it’ll be kinda cool.”

While the two acts haven’t played live together before, Barrere notes that he and Tackett share some history with Hall, who was a Democrat who represented the Hudson Valley’s 19th Congressional District from 2007 to 2011.

“John played on the original recording of [Little Feat’s] ‘All That You Dream,'” way back in 1910 or something like that,” Barrere says with a laugh.

Barrere and Tackett share a lot more history than that, though.

END_OF_DOCUMENT_TOKEN_TO_BE_REPLACED

Get ready for The Chew Toys to put the bite on you (video, SoundCloud)

Jay Tag and Kevin Dickson are The Chew Toys. (Photo by Dave Ehrlich)

The infectious sound of The Chew Toys makes them one of the most entertaining new bands in Los Angeles these days.

The self-proclaimed queercore duo comprises married couple Jay Tag and Kevin Dickson, who have been polishing — maybe refining is a better word — their punk sound with dozens of live shows around Northeast LA since 2012.

On Sept. 2, this local legend will take break out of LA and take on the unsuspecting world with their first album, a self-titled collection of 13 songs — 11 of which clock in at well under 3 minutes — that are sure to become earworms.

Check out a video and a SoundCloud song sample after the jump.

END_OF_DOCUMENT_TOKEN_TO_BE_REPLACED

The married music makers open up about new album Wassaic Way, working with Jeff Tweedy and keeping their family life in balance after 14 years of marriage 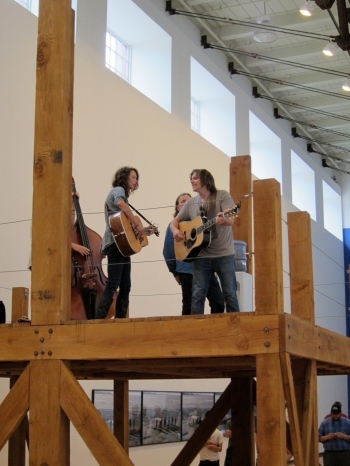 Sarah Lee Guthrie and Johnny Irion perform atop an artwork in a gallery at the Massachusetts Museum of Contemporary Art in North Adams, Mass., during the Solid Sound festival in 2011. (Photo © 2011, Steven P. Marsh)

Alongside a two-lane back road in the Berkshires region of Western Massachusetts sits a solid, simple frame home.

Sited on what appears to be at least a couple of acres atop a hill, its nearest neighbor is farther than you can throw a stone, but not so far as to be out of sight.

The house is far enough from the main highway to provide a peaceful retreat, but with easy access to civilization — whether you consider that North Adams, Pittsfield, Boston or beyond.

The silence — at least outdoors, anyway — is broken only by the occasional animal noise or the air-horn warning and rumble of one of the freight trains that pass through on a regular basis.

Inside, it’s a very different story.

That’s where Sarah Lee Guthrie and Johnny Irion are raising their kids — “counting the cousins, on any given day there are four to six. But normally, two: Olivia’s 11, Sophia’s 6,” Johnny told Will You Miss Me When I’m Gone? in an exclusive interview.

And it’s home base for their business. Downstairs, in a studio-basement-rehearsal space, the married musical duo practice and record their music.

Things are really happening for Sarah Lee and Johnny. They seem like a duo on the verge of overnight success — albeit after one very long and ofttimes sleepless night.

But we’ll get to that in a minute. First, let’s clear up something: While Sarah Lee and Johnny aren’t household names, there’s something about them that rings the bell. 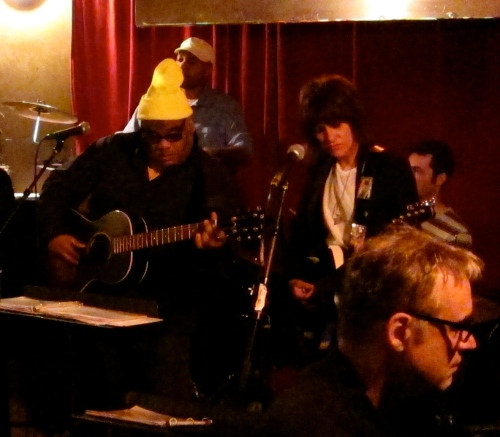 (Click through to the jump for all the details.) END_OF_DOCUMENT_TOKEN_TO_BE_REPLACED

The amazing composer/performer/arranger/producer Jon Brion is a fixture on the Los Angeles music scene, with his regular appearances at Largo— gigs that draw on his huge circle of musical friends. So it was a thrill to see that he was going to spend several nights in New York City this October. It was his first visit since 2002, when he spent a couple of night in residence at the Canal Room.

We got a chance to catch his set on Oct. 3, his third night at (Le) Poisson Rouge on Bleecker Street in Greenwich Village. He did not disappoint, working his butt off in his one-man-band style, looping guitar, piano and drums and moving seamlessly through the pop landscape with net or set list.

Check out more photos of  Jon’s Oct. 3 show after the jump.