Get ready for The Chew Toys to put the bite on you (video, SoundCloud) 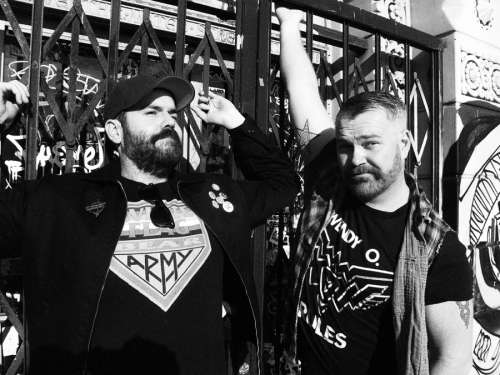 Jay Tag and Kevin Dickson are The Chew Toys. (Photo by Dave Ehrlich) 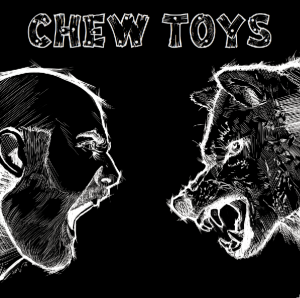 The infectious sound of The Chew Toys makes them one of the most entertaining new bands in Los Angeles these days.

The self-proclaimed queercore duo comprises married couple Jay Tag and Kevin Dickson, who have been polishing — maybe refining is a better word — their punk sound with dozens of live shows around Northeast LA since 2012.

On Sept. 2, this local legend will take break out of LA and take on the unsuspecting world with their first album, a self-titled collection of 13 songs — 11 of which clock in at well under 3 minutes — that are sure to become earworms.

Check out a video and a SoundCloud song sample after the jump.

The drums-and-guitar duo clearly have listened to a lot of Dead Boys, Plasmatics, and Dead Kennedys recordings, and incorporated that into their fast-and-furious songs about drugs,  booze, and partying. But the album also shows they’ve ingested the country and Americana influences of another LA band, X, and The White Stripes, too.  (I’ve got to say that while Jay lacks a couple of Meg White’s most, ummmm, attractive attributes, his monster drumming skills more than make up for that.)

(Full disclosure: Kevin, an Australia-born writer, editor, and gossipeuse, has been a good friend for years, and I supported this album’s Indiegogo campaign.)

Their songs follow the punk formula, often with a nice tongue-in-cheek feel, and they tackle topics that often grow out of the gay scene, but have much wider application, including their hatred of Christmas, social media, and the loss of friends.

Kevin and Jay, who have been off the live scene while making the album and getting ready for next month’s release, are ready to jump back into the fray. They’ve been writing new songs and will start playing shows next month to support the album.

They’ll be sticking close to the LA area for now. But there’s nothing standing in the way of checking out the album. It’s a fun record, and very much worth a listen.

If you like what you hear, be sure to pester your local music promoter to entice them to head east. They’re itching for the opportunity. Write to thechewtoys@gmail.com for information.

2 responses to “Get ready for The Chew Toys to put the bite on you (video, SoundCloud)”