‘You Us We All,’ well … I am very disappointed

I wanted to love “You Us We All,” the celebrity-citing, pop culture-driven modern opera in Baroque form — in its music, theatrical arc, staging, and costuming — that had its first performance Wednesday night at the Brooklyn Academy of Music’s Harvey Theater. (You can judge for yourself. Performances continue through Saturday. Buy tickets here.)

After all, I think Shara Worden, a classically trained singer who performs in the pop world as My Brightest Diamond and works the New Music circuit under her given name, wrote the music and is one of the singers.

I didn’t know anything much about Andrew Ondrejcak, who wrote the text, directed, and designed the production or about B.O.X. (Baroque Orchestration X), which commissioned the piece and provides the first-rate instrumental ensemble, but had high hopes.

I’ve frequently enjoyed Worden’s work in pop and New Music. And I’ve been itching for a new work to come along that as exciting and challenging as, say, Thomas Adès’ “Powder Her Face.” But this piece isn’t up to that task.

In fact, “You Us We All” ultimately left me wondering whether I had wasted my evening.
It isn’t without merit. The music is lovely, some of the singing is delicious, the chamber orchestra is splendid, and the text is wickedly funny at times. But all those positives created more of a pastiche than a written-through show.

I chalked up my discontent at first to being tired. I found the piece very difficult to follow, and the poorly projected supertitles almost impossible to read from my upper orchestra seat. (You might think supertitles wouldn’t be crucial for an English-language production, but you’d be wrong.)

But then I saw members of the opening night audience slipping out early. It’s not unheard of at BAM, but audiences there are generally more tolerant and attuned to avant garde work than audiences at, say, the Metropolitan Opera.

I realized I wasn’t just being cranky about this when I read  Zachary Woolfe’s review in The New York Times review, which declares the piece “earnest and eventually tiresome.”

Tagged Andrew Ondrejcak, B.O.X., BAM, Baroque, Brooklyn Academy of Music, My Brightest Diamond, Shara Worden, You Us We All 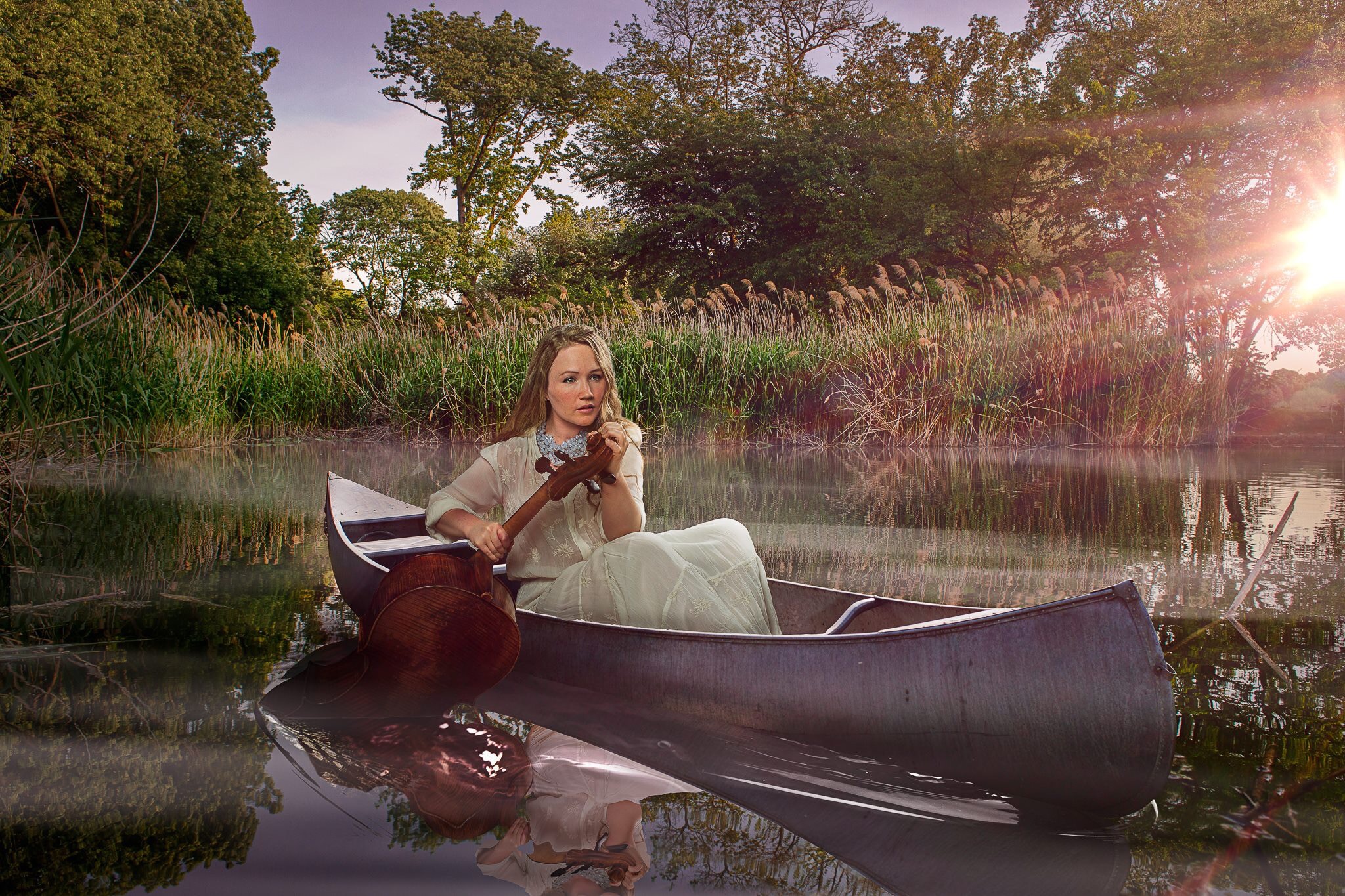 If you have an itch to hear one of the best New Music cellists around but hate the thought of traveling to Manhattan or Brooklyn to do it, Nov. 13 is your lucky day — even though it’s a Friday the 13th!

Ashley Bathgate, a member of the groundbreaking Bang on a Can All-Stars, brings her talents to the county’s own repurposed historic factory complex, the GARNER Arts Center at the Garnerville Arts &  Industrial Center. for a one-night-only performance.

If I weren’t committed to working late that evening, I’d be the first in line to get a good seat for what is sure to be an exciting performance by one of my favorite string players.

This won’t be her first time playing in an industrial space like GARNER. Bang on a Can members are quite used to such a setting. They run a summer music camp every year at MASS MoCA, the modern art museum that occupies an old factory complex in North Adams, Massachusetts. GARNER has a similar vibe.

Ashley will play amid  light and sound installations, including projections by downtown Manhattan art icon M. Henry Jones during the performance.

Check out these videos of Ashley in action. (Scroll past videos for venue and ticket information.)

Pianist Vladimir Feltsman arrived in the United States a quarter century ago after spending eight years as essentially a nonperson in the Soviet Union, his homeland. After finally being permitted to emigrate to the West, the former refusenik has tried hard to stop talking about those dark days.

After years of playing many concerts every year, he’s settled into a schedule of a smaller number of carefully selected appearances, always performing superbly, but always on the hunt for the sweet spot. As he tells me in a conversation for lohud.com/The Journal News: “On some good days — it’s not always happening — but when it’s happening, it feels great. There’s like an exchange of energy, which is very much real and tangible, between public and artist. So when that happens it feels really good.”

Please tap or click here to check out the conversation.

It’s a disservice to call Mark Stewart a guitarist. He leads a group at MASS MoCA in making some noise with some of his homemade tubes during the 2010 Bang on a Can Summer Music Festival. (Photo © 2010, Steven P. Marsh)

18 days of fantastic summer music in the Berkshires

I’ve written a lot lately about the Massachusetts Museum of Contemporary Art, especially in the last month or two because of Wilco’s splendid Solid Sound Festival, held on the museum campus in North Adams, Mass., in late June.

When Wilco announced the inaugural Solid Sound back in 2010, I pretty much knew it would be great because I had already seen MASS MoCA host many, many editions of the Bang on a Can Summer Music Festival — colloquially known at Banglewood.

If you’ve been a regular reader of Will You Miss Me When I’m Gone?, you already know something about the Bang on a Can program. This summer’s program is the 12th annual festival on the beautiful industrial MASS MoCA grounds.

But maybe you’re not a musician, or at least not one who wants to participate in the festival. How does this matter to you?

That’s easy. Festival participants do their learning in public, putting on recitals six days a week and participating in a public Marathon concert on the final day. There’s also a performance of Bang on a Can co-founder Julia Wolfe‘s Steel Hammer, a full-length piece that weaves together the many variations of the John Henry folk legend.

So there’s plenty of professional-quality entertainment  for people who are just interested in listening and looking at some modern art. (Click through to the jump for schedule and ticketing information.)

END_OF_DOCUMENT_TOKEN_TO_BE_REPLACED

Make time for Lincoln Center Out Of Doors | ALL SHOWS FREE

Singer-songwriter Erin McKeown was one of many performers at the 2012 Lincoln Center Out Of Doors festival. (Photo © 2012, Steven P. Marsh)

The flyer for Lincoln Center Out Of Doors arrived in my mailbox the other day. It reminded me that I hadn’t posted a single word about this free outdoor concert series yet.

So here goes. It’s a super linuep, as always, meticulously planned by Bill Bragin, director of public programming, and his amazing team.

Does that whet your appetite? If not, you’re probably reading the wrong blog.

The free outdoor shows start July 24 and run through Aug. 11 at various locations around the Lincoln Center campus on Manhattan’s Upper West Side.

Check out the whole lineup by clicking or tapping here (http://bit.ly/15MOo6P).

I hope to see you there. 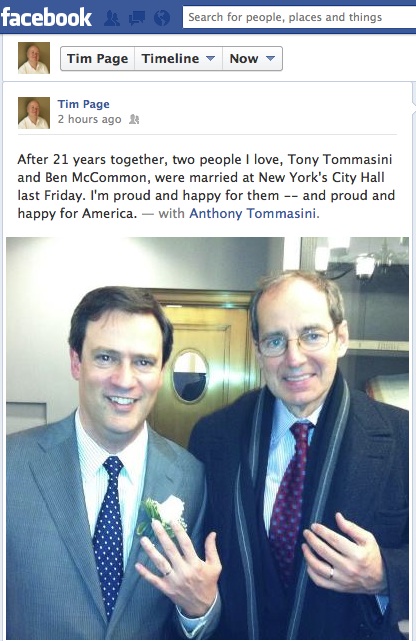 The couple, who have been together for 21 years, tied the knot at New York City Hall, Page reports, complete with a photo of the happy couple displaying their wedding bands.

McCommon is a 1998 graduate of Columbia University’s medical school, is  assistant clinical professor of psychiatry at Columbia and attending psychiatrist at NewYork Presbyterian Hospital according to his hospital profile.

Tommasini, a Brooklyn native born in 1948, has been at the Times since 1996. He became chief classical music critic for the paper in 2000. He also is a pianist and the author of two books, Virgil Thomson: Composer on the Aisle, and Opera: A Critic’s Guide to the 100 Most Important Works and the Best Recordings.

When the doors open at 7 o’clock tonight at The Turning Point, the venerable music club in Piermont, there will be a greater sense of urgency and community than ever inside.

A slew of local favorites, including Tom Chapin, a longtime Piermont resident, will rock out starting at 7:30 p.m. to raise money to help get the village back on its feet in the wake of Superstorm Sandy. The Old No. 7 Band, Joe Grunfeld from the Riley Etheridge Band, Becky Deloatch and Billy Procida are also on the schedule. And other guests and favorites are sure to show up and join in.

It’ll be a lot of fun and will help a really worthwhile cause.

Who knew John Darnielle had a secret wish to work with Anonymous 4, the a cappella quartet that specializes in music of the 12th through 15th centuries? The Ecstatic Music Festival, created by New Amsterdam Records‘ Judd Greenstein, gave him a shot, and the result was Transcendental Youth, a song cycle presented Saturday,  March 24, at Merkin Concert Hall.

Darnielle, the writer and singer who performs as the Mountain Goats (and for this evening, he was the lone Goat) got the “why” question out of the way first.
As he was getting ready to finish college, his dad gave him a gift — a CD of A4’s 1993 An English Ladymass— an intense listen, he said, and one he returned to over and over as he coped with the more mundane stresses of completing two thesis papers (in English and Classics).

The Mountain Goats set list is after the jump.

END_OF_DOCUMENT_TOKEN_TO_BE_REPLACED

Maya Beiser, one of the best cellists at work today returns to her roots on Tuesday, Feb. 1, joining tango master Pablo Ziegler, a composer and pianist, for a program of tangos in tribute to the late Ástor Piazzolla. 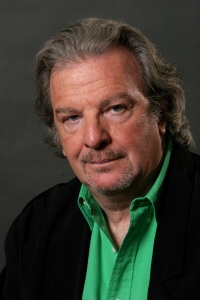 Their program, Canyengue, the Soul of Tango, offers Ziegler’s arrangements of some of Piazzolla’s best-known numbers along with some that are rarely heard. Percussionist Satoshi Kateish will sit in on some of the tunes. Performances of some of Ziegler’s compositions and Beiser’s solo rendition of Osvaldo Golijov‘s Mariel, will round out the program.

The Latin Grammy-winning Ziegler was a member of Piazzolla’s band for 10 years, and went on to form his own tango ensemble, so he lives and breathes the fiery musical form.

END_OF_DOCUMENT_TOKEN_TO_BE_REPLACED

Get ready for the Bang on a Can Marathon

Asphalt Orchestra will open the 2011 edition of the Bang on a Can Marathon by performing "Carlton" by Stes and Heidi Rodewald and "Opus 81" by Yoko Ono. (Photo © 2010, Steven P. Marsh)

Memorial Day may be the unofficial start of summer, but it doesn’t really get started for us at Will You Miss Me When I’m Gone? until the annual Bang on a Can Marathon arrives.

This year’s edition is Sunday, June 19. It’s scheduled to run from 11 a.m. to midnight, meaning we’re in for a real treat of 13 continuous hours of music — all for FREE at the World Financial Center Winter Garden in Manhattan’s Battery Park City. 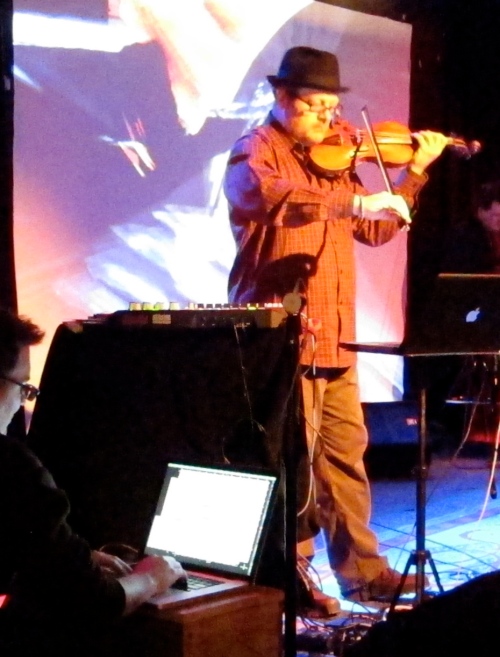 Scheduling problems (also known as my day job) last year made it hard to take in much of the daylong (mostly indoors) event.

We managed to listen only for a couple of hours. We’re not going to let that happen this year. We’ve made sure to save the time and date this year. You should, too. 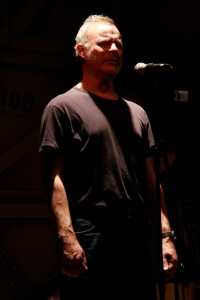 Aside from our recurring favorites, this year’s marathon also features a performance by the Sun Ra Arkestra in the 8-10 p.m. slot, and the Glenn Branca Ensemble as the day’s closer.

Aside from works by Bang on Can founders Julia Wolfe, Michael Gordon and David Lang, the day features music by luminaries such as Philip Glass. Iannis Xenakis and Michael Nyman. However, the music of Steve Reich, a godfather of Bang on a Can, is absent from the program.