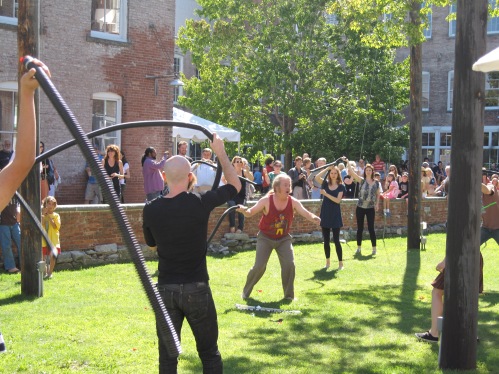 It’s a disservice to call Mark Stewart a guitarist. He leads a group at MASS MoCA in making some noise with some of his homemade tubes during the 2010 Bang on a Can Summer Music Festival. (Photo © 2010, Steven P. Marsh)

18 days of fantastic summer music in the Berkshires

I’ve written a lot lately about the Massachusetts Museum of Contemporary Art, especially in the last month or two because of Wilco’s splendid Solid Sound Festival, held on the museum campus in North Adams, Mass., in late June.

When Wilco announced the inaugural Solid Sound back in 2010, I pretty much knew it would be great because I had already seen MASS MoCA host many, many editions of the Bang on a Can Summer Music Festival — colloquially known at Banglewood.

If you’ve been a regular reader of Will You Miss Me When I’m Gone?, you already know something about the Bang on a Can program. This summer’s program is the 12th annual festival on the beautiful industrial MASS MoCA grounds.

But maybe you’re not a musician, or at least not one who wants to participate in the festival. How does this matter to you? 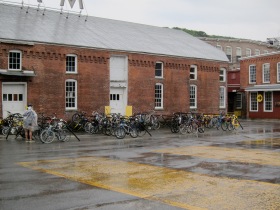 That’s easy. Festival participants do their learning in public, putting on recitals six days a week and participating in a public Marathon concert on the final day. There’s also a performance of Bang on a Can co-founder Julia Wolfe‘s Steel Hammer, a full-length piece that weaves together the many variations of the John Henry folk legend.

So there’s plenty of professional-quality entertainment  for people who are just interested in listening and looking at some modern art. (Click through to the jump for schedule and ticketing information.)