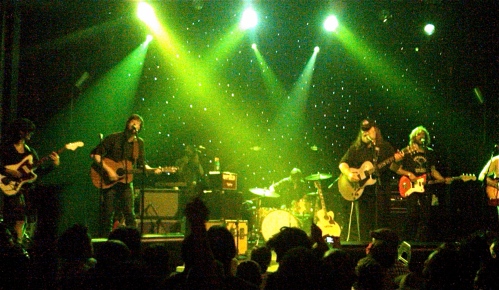 As unlikely as it may have seemed at first, the new collaboration between psychedelic rock legend Roky Erickson and Austin, Texas-based band Okkervil River, the results are stunning.

Their new album together, True Love Cast Out All Evil, was the first evidence of a truly symbiotic musical relationship. But with enough studio tricks, just about anybody can make a decent album. The true test is in live performance.

Well, they proved to a New York audience — a melding of gray-beard, old-school Roky fans and younger Okkervil River aficionados — at Webster Hall in the East Village last night (May 25, 2010) that they really know how to kick out the jams live, too.

From the very first chords — wisely not something from the new album, but a scorching version of Roky’s classic “Night of the Vampire” — it was evident that it was going to be a show to remember. And it just got better from there. Okkervil’s frontman,  Will Sheff, who with his beard and spectacles looked every bit like a long-lost son of John Lennon, spent the 90-minute set grinning from ear to ear as he played out his guitar fantasies onstage with Roky. 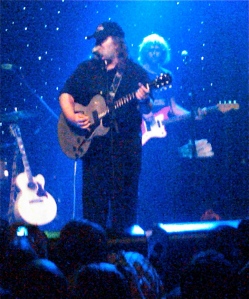 This was clearly a labor of love for Sheff and his band. Okkervil River was definitely not a backup band, but a true collaborator with Roky.

It was a set they’ve been working on. It was a well-planned, and by last night at least, well-practiced. (The setlist from the show at the Fonda in Los Angeles, was virtually identical.)

But it felt nothing short of joyous and spontaneous. It kept the energy going with a perfect flow of songs, mixing new and old, and pacing things with a sprinkling of slower numbers amid the rip-roaring howlers.

The evening ended the only way it really could have, with a blast-furnace scorcher of a version of “You’re Gonna Miss Me,” a song that Roky (born Roger Kynard Erickson on July 15, 1947) wrote at age 15.

I know it’s only the end of May, but I left this show last night feeling like it was the show of the year. I certainly won’t forget it anytime soon.

While you never know for sure if things that people put out on Twitter are true or not, Okkervil River tweeted hours before last night’s show that the band’s amps were not at soundcheck because of a misunderstanding with the NYPD in Times Square. At this hypersensitive time in New York City’s history, anything is possible. 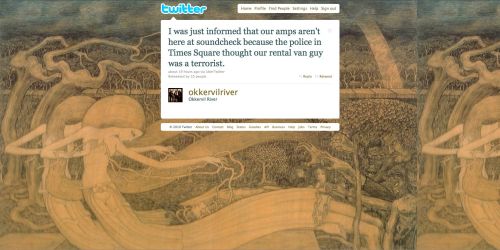 Okkervil River didn't have its amps for soundcheck last night. Something about the NYPD.

The opening band, Brooklyn’s Bird of Youth (a side project for Elk City‘s Ray Ketchem) was suitably honored by the position, and even performed one of Roky’s songs — with permission.

Meanwhile, Charles Bissell, guitarist and “Pedal Boy” genius of The Wrens, could be seen backstage through the green room window. Since he has worked with Bird of Youth, playing on that band’s album, and has toured with Okkervil River and recorded with Will, I was expecting him to hit the stage at some point. Sadly, that never happened.