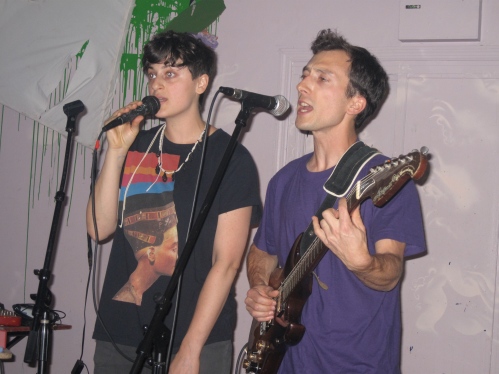 WOOM, a charming, Oakland, Calif., -based DIY duo, played two shows in New York City before heading to Europe to tour as an opener for Xiu Xiu well into June.

Will You Miss Me When I’m Gone? was fortunate to catch their set at Death By Audio in South Williamsburg, Brooklyn, last Wednesday (May 19, 2010), the night before they headed to Newark Liberty International Airport to head out on tour. The pair — Eben Portnoy on guitar and vocals and Sara Magenheimer on vocals and electronics — played a fuzzy, beat-driven set that was an absolute joy to hear.

WOOM at Death By Audio.

An Intimate Exchange of Ideas

The pair played their hearts out, bouncing ideas back and forth between them casually but with obvious skill.

The band is due back in New York City at the end of June for the Northside Festival, which runs from June 24-28 in Williamsburg and Greenpoint. Festival badges are $50 and available here.

WOOM’s first full-length album is scheduled to drop on June 28 on Ba Da Bing Records. In the meantime, check out WOOM’s music on MySpace.