Who will replace the Beastie Boys at All Points West? 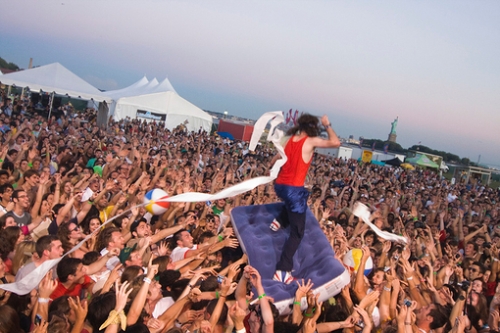 The crowd at the 2008 All Points West festival.

If you have tickets to next weekend’s All Points West music festival on Liberty Island in Jersey City N.J., it’s disappointing news that the Beastie Boys have canceled their appearance in the wake of Adam “MCA” Yauch‘s announcement yesterday that he has cancer — described as a “very treatable” tumor in his salivary gland.

In addition to canceling shows, the venerable rap group has delayed the release of its new album, Hot Sauce Committee Part 1 to give Adam, who is 44 years old, time to recover from the surgery he needs.

To tide you over, here’s a taste of Too Many Rappers, a track from the now-delayed album:

With opening night just 10 days away, the pressing question is who’s available to replace the Beasties as headliner for the huge festival? Can the Yeah Yeah Yeahs, the night’s second-biggest act, step up to the top spot? It seems unlikely that Karen O and her quirky mates have broad enough appeal — especially with the Beasties’ older demographic — to satisfy the crowd.

Click through to the jump for a list of possible replacements at APW and to see MCA’s video announcement.

All Points West organizers are asking fans to “sit tight,” which can only mean they are desperately scrambling to find an act to fill the bill. There’s already speculation on the Internet about artists who might fit and have openings in their schedules: Kings of Leon (who played last year, which makes them unlikely in my view), The Killers, Pearl Jam, The Pixies and Paul McCartney. All of these seem plausible on some level. It’ll be interesting to see what the APW organizers come up with. Stay tuned.

Meanwhile, best of luck to MCA with his treatment!