The Feelies on the Fourth

It would be easy to get used to making a tradition out of celebrating the Fourth of July with The Feelies.

Although their long-awaited comeback started at Maxwell’s in Hoboken

on June 30-July 2,  2008 (and those shows thrilled me) , they announced their return in a big way  two days later, opening for Sonic Youth in NYC’s Battery Park on the Fourth of July. The sun, sweat, humidity and the huge crowd just made the experience more intense. The band did not disappoint.

Percussionist Dave Weckerman seems content to stay in the background.

As you’ve probably read here earlier, The Feelies took over Maxwell’s for three nights this month, from July 2-4.

On that last night, thousands crammed the streets and waterfront of Hoboken to see the Macy’s fireworks, while dozens of true believers ignored the holiday hoopla and chose to watch the guitar pyrotechnics of Glenn Mercer and Bill Million instead.

I didn’t mind missing the fireworks outside, not at all.

The Feelies are a band that doesn’t offer too many surprises. Their shows are like your favorite jeans, well-worn, broken in  and perfectly comfortable. They feel good — and just right. They don’t throw many curve balls — even the multiple covers they did as encores over the three nights had little variation from night to night. But none of that matters to a true Feelies fan. In fact, curve balls might ruin the equilibrium.

At the July 4 show, I was positioned very close to the stage. That made for clearer shots of individual band members or pairings of players, but didn’t give me a chance to shoot an overview. So this will give you a very different perspective than the previous night’s shots.

Rich Barnes of Wild Carnation (and Brenda's husband) helped out on keyboard.

My position made it tough to spot local heroes in the audience. But at the end of the night, I spotted Georgia Hubley and Ira Kaplan of Yo La Tengo returning to the music room as the majority of the crowd was filing out. You can always count on them being at a Feelies show. The only other face I wish had been in the crowd was filmmaker Jonathan Demme, who featured The Feelies as “The Willies” in his 1986 movie Something Wild. I guess that was his payback for making  Stop Making Sense two years earlier about the Talking Heads instead of The Feelies!

Bunny in the back yard 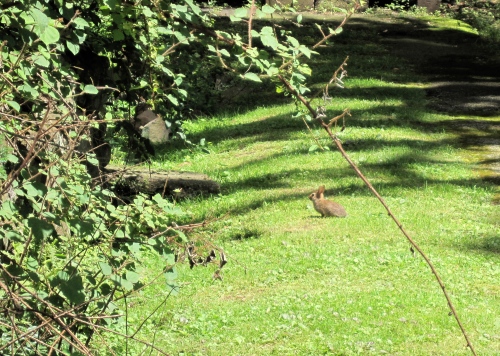 Okay, this post has nothing to do with music. And it doesn’t have anything very obvious to do with theater or the arts. But this little brown bunny in our backyard has captured our attention like a reality show.

Where’s its mate or its parents? No idea.

Where does it hide out when it’s not hopping — or dashing like, well, a bunny out of hell — around the yard, nibbling on broadleaf weeds? Somewhere in the old stone retaining wall.

Tonight the bunny was in the driveway, just a few inches from the grass, but on the macadam in front of the garage. I drove in and it — he? she? — took off in a puff of fluffy white tail.