Up for a Passing Strange road trip? 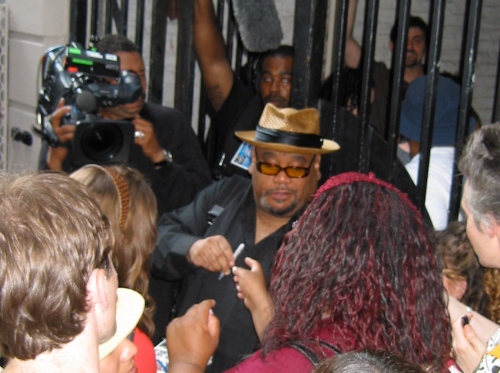 He’s so glad he’s not on Broadway: Stew and his adoring fans after the final Broadway performance of Passing Strange on July 20, 2008. (Photo by SPM, all rights reserved.)

Just a month after hitting the Tribeca Film Festival, Spike Lee‘s film of Passing Strange will be screened at the Seattle International Film Festival on Saturday, May 23.

Spike Lee at the final Broadway performance of Passing Strange. (Photo by SPM, all rights reserved.)

They’re doing an interview and Q&A session, oddly, before the screening, which no doubt will help avoid the really thorny audience queries, like what co-creator and narrator Stew really meant by “What’s inside is just a lie.”

Spike is also slated to get the SIFF’s 2009 Golden Space Needle Award for Outstanding Achievement in Directing.

Think that means they really, really wanted him to show up?

I’m a few hours late to the party, I know, but I must add my voice to the chorus cheering for Steve Reich‘s Pulitzer Prize win, announced this afternoon. He won for Double Sextet, which had its world premiere by the eighth blackbird ensemble on March 26, 2008 in Richmond, Va. I heard the piece’s New York City premiere in Carnegie Hall‘s Zankel Hall on April 17, 2008.

The other finalists were Don Byron (7 Etudes for Solo Piano) and Harold Meltzer (Brion).

Steve is one of the most inventive composers of our time. And he’s a modest, personable man, to boot. I remember the first time I was honored to spend time with him — at a Bang on a Can benefit dinner a few years back. I was lucky enough to be seated at his table, and spent some time trying to come up with just the right conversational approach. He was barraged all evening by people who obviously wanted a piece of him, wanted recognition, wanted to bask in his greatness. When I got a chance to speak to him, I opened by asking about his son, Ezra, who’s also a fantastic musician I truly admired. That brought a smile to Steve’s face the likes of which I hadn’t seen all evening, and opened the door to a good conversation.

Congratulations to Steve for the long-overdue recognition from the Pulitzer jury. I guess it just goes to prove that nice guys don’t always finish last!

Go here to see the official Pulitzer Prize list of winners and finalists for 2009.

Or check out the NewMusicBox online magazine for Frank J. Oteri’s piece on Steve’s win and links to rehearsal and recording videos.