How often do you go to a show and feel like you’ve heard such an amazing opening act that you’re ready to skip the headliner? 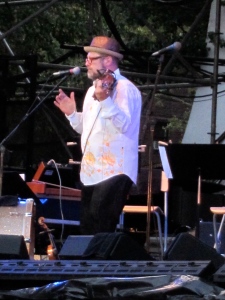 But that’s exactly the way I felt at Lincoln Center Out of Doors on Wednesday night, Aug. 10. It was another triumph in New York’s best free outdoor concert series, which The New York Times describes perfectly as “generous, warm, high-spirited real entertainment for a big audience.”

Don’t get me wrong, Laurie Anderson was the headliner of the free show in Lincoln Center’s Damrosch Park. She is — and was that night — amazing. But openers Todd Reynolds and Sxip Shirey, joined by six violinists and a tuba player, blew the house down with their collaboration. I could have gone home floating on air after their set, feeling perfectly satisfied.

Todd, the inimitable Digifiddler, kicked off his set with some of the inventive work from his new album, Outerborough. Laurie’s husband, Lou Reed, slipped through the crowd and backstage while Todd was really wailing on “Crossroads,” a Michael Lowenstern-composed “duet” with bluesman Robert Johnson.

In short order, Todd was joined by six more violinists, each of whom is pretty amazing in his or her own right (Caleb Burhans, Conrad Harris, Pauline Kim Harris, Yuki Numata, Courtney Orlando, and Ben Russell). The Sxip, the multi-instrumentalist clown prince of the NYC indie music scene entered along with Adam Matta (the Human Beatbox) and tuba player Don Godwin of Raya Brass Band. (Check out a rehearsal clip of Todd and Sxip cutting loose here.)

The energy that flowed among all these talented musicians as they jammed onstage was palpable. And there was lots of love flowing from stage to audience and back again.