How often do you go to a show and feel like you’ve heard such an amazing opening act that you’re ready to skip the headliner?

But that’s exactly the way I felt at Lincoln Center Out of Doors on Wednesday night, Aug. 10. It was another triumph in New York’s best free outdoor concert series, which The New York Times describes perfectly as “generous, warm, high-spirited real entertainment for a big audience.”

Don’t get me wrong, Laurie Anderson was the headliner of the free show in Lincoln Center’s Damrosch Park. She is — and was that night — amazing. But openers Todd Reynolds and Sxip Shirey, joined by six violinists and a tuba player, blew the house down with their collaboration. I could have gone home floating on air after their set, feeling perfectly satisfied.

Todd, the inimitable Digifiddler, kicked off his set with some of the inventive work from his new album, Outerborough. Laurie’s husband, Lou Reed, slipped through the crowd and backstage while Todd was really wailing on “Crossroads,” a Michael Lowenstern-composed “duet” with bluesman Robert Johnson.

In short order, Todd was joined by six more violinists, each of whom is pretty amazing in his or her own right (Caleb Burhans, Conrad Harris, Pauline Kim Harris, Yuki Numata, Courtney Orlando, and Ben Russell). The Sxip, the multi-instrumentalist clown prince of the NYC indie music scene entered along with Adam Matta (the Human Beatbox) and tuba player Don Godwin of Raya Brass Band. (Check out a rehearsal clip of Todd and Sxip cutting loose here.)

The energy that flowed among all these talented musicians as they jammed onstage was palpable. And there was lots of love flowing from stage to audience and back again.

They wrapped their set with a massive version of Sxip’s “I Live in New York City,” which provided a perfect segue into Laurie’s new composition, “The Real New York.” She spent her set spinning tales of the city against an instrumental backdrop. It was great, demonstrating her sharp eye for amusing detail (Her line “There are hardly any bookshops, but there are lots of… cupcake shops” drew some guilty but knowing titters). But the piece sounded almost too familiar.

Laurie’s a legendary violinist. Todd said at the end of the opening set that Laurie “gave me a career.” But she appeared to barely touch the instrument, focusing on her topical spoken-word lyrics and leaving the work of accompanying her to Rob Burger on piano and electric keyboards and Eyvind Kang on viola. She picked up her violin at the end of the set for a jam with Lou.

If you want a “serious” review of the show, check out Allan Kozinn’s take in the NYT.

Aurora Nealand & the Royal Roses on the plaza for Spike's Side Show at Lincoln Center Out of Doors.

Oh, and we must remember the great pre-show activity on Wednesday, Spike’s Side Show, featuring some real circus people, like contortionist Jonathan Nosan, barker Ward Hall and hula hoop artist Miss Saturn, along with other entertainers, like the enduring folkie singer-songwriter Christine Lavin, around the plaza. (LCOOD has been doing a lot of warmup acts on the plaza this season. They’re a really great addition.) 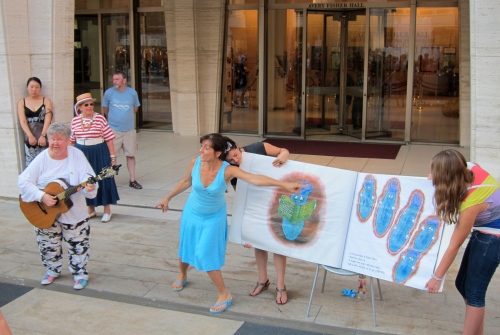 Christine Lavin plays "Amoeba Hop" while illustrator Betsy Franco turns the pages of an outsized version of their collaborative children's book based on the song. 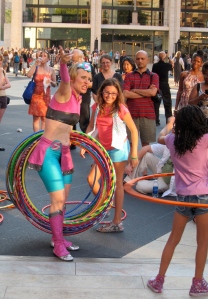 Miss Saturn and her enthusiastic audience

Lincoln Center Out of Doors wraps up its 2011 season tomorrow (Sunday, Aug. 14). Click here for the schedule. As you’ll see, there’s plenty more great music to check out today and tomorrow, so don’t miss out. And remember, it’s all free. 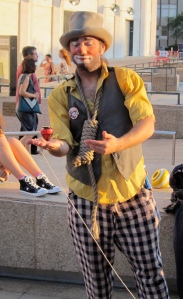 A clown in Spike's Side Show