Travels and travails of a punk princess

When Yasmine Lever wanted an original but authentic-sounding punk rock score to fuel her new musical-in-development, Punk Princess, she turned to her friends Stew and Heidi Rodewald, the creators of Broadway’s 2008 critical smash Passing Strange.

The result, revealed to the public for the first time yesterday in two readings at The Theatre at St. Clement’s as part of the New York Musical Theatre Festival, was a lively show with memorable music, a winning cast and tons of promise.

END_OF_DOCUMENT_TOKEN_TO_BE_REPLACED

Nadia Sirota performs OMFG with the composer, Our Lady J, on the piano at Galapagos last night. .

New Amsterdam Records has a reputation for taking risks with  lesser-known cutting-edge musicians and giving them a chance to really shine. The label last night launched a new monthly series call Archipelago at Galapagos Art Space in the Dumbo section of Brooklyn. New Amsterdam tested the waters, so to speak, in the spring with a short series dubbed Undiscovered Islands. The new series ‘ name continues the water-land theme (appropriate at a venue where some of the seats appear to float in a pool of water).

There’s plenty of self-interest involved, as virtually all of the Archipelago performers are New Amsterdam artists. But because the label has such an interesting mix of talented performers, there’s little chance of a dud.

The series kicked off last night with a set by one of the label’s most inventive and skilled artists, violist Nadia Sirota, and the percussion quartet Line C3. The six-year-old quartet (Haruka Fujii, John Ostrowski, Eric Poland, and Chris Thompson) doesn’t appear to be on New Amsterdam’s roster — though I wouldn’t be surprised if that were in the works — and I was not familiar with them before last night.

The performers mixed it up, playing together and separately throughout the all-too-short program. Nadia kicked off the evening with the premiere of Future Shock by New Amsterdam co-director William Brittelle, a percolating blend of Nadia’s viola and electronics. Line C3 took the stage to perform a 2004 piece written for the quartet by Nico Muhly, Ta and Clap. 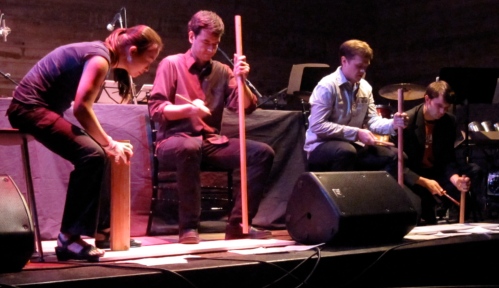 Go to the jump to see Line C3’s video of Ta and Clap and read more about last night’s show. END_OF_DOCUMENT_TOKEN_TO_BE_REPLACED