Bang on a Can Marathon: 9 hours of New Music in a new home this Sunday

This Sunday is a special day.

Sunday is also the day that Bang on a Can is throwing its big, genre-bending musical party for New York City — the Bang on a Can Marathon.

Mark your calendar and don’t miss it. But don’t head to the Winter Garden at the World Financial Center, where the free marathon New Music concert has been held for the last few years.

From 1-10 pm on Sunday (be sure to take Dad to brunch early and then bring him along to the show afterward), Bang on a Can will fill Pace University’s Michael Schimmel Center for the Arts at 3 Spruce Street with nine hours of music — some of it familiar, some you’ve probably never heard before.

It’s the kickoff event of the River to River Festival, one of the city’s great free performing-arts series.

Bang on a Can had to move the marathon this year because the Winter Garden is under construction. The Schimmel Center is a smaller venue, a concert hall with fixed seating rather than a mall atrium with open, casual seating. So that means changes in the format.

Asphalt Orchestra performing at the 2011 Bang on a Can Marathon.

For starters, you’ll need to get a free seating pass before you go in to sample the sounds. That’s just so the organizers can make sure the audience never exceeds the capacity of the 743-seat hall. They’ll be handing out the passing starting at noon — an hour before the first onstage event — on a first-come, first-served basis, so get there early to snag a good seat.

In addition to listening to the music, be sure to jump in on Twitter, too, by following on @bangonacan.

While most of the action is in the hall, if you get there early, you’ll encounter Bang on a Can’s Found Sound Nation. From noon until 5 pm, it’ll be operating its Street Studio, where anyone who wants to give it a try can create and record original music. Look for it at Park Row and Spruce Street.

Check out the full schedule after the jump.

END_OF_DOCUMENT_TOKEN_TO_BE_REPLACED 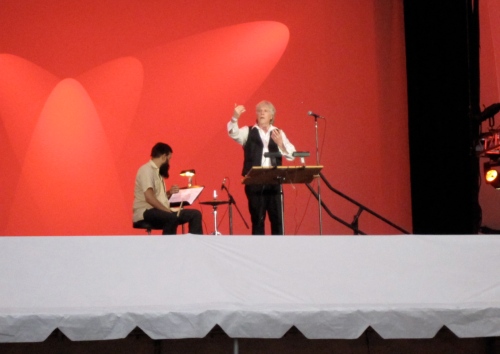 Rhys Chatham, with Hi-Hat player Ryan Sawyer at his side, conducting "A Crimson Grail" in Damrosch Park. (All photos copyright 2009, Steven P. Marsh, except where noted otherwise.)

It started as a low rumble and over the course of about an hour got increasingly loud. It  was the sound of 200 electric guitars, 16 electric basses and one hi-hat cymbal playing the world premiere of Rhys Chatham‘s  A Crimson Grail for 200 Electric Guitars (Outdoor Version). (No, I wasn’t metering it, but one of the guitarists reported it reached 116 dB’s during rehearsals at the Fashion Institute of Technology’s Great Hall. It was probably a bit quieter in performance.)

The project was 18 months in the making. It was supposed to happen last August at Lincoln Center Out of Doors, but a downpour that passed before the performance could start left pooled water on the ground at Damrosch Park, making it way too dangerous to proceed, given all the electricity involved. Last night, the volunteer players — about two-thirds of whom returned from last year — were protected from any threat of rain by canopies. But Mother Nature was kind, gracing showtime with cool temperatures and clear skies, followed by a bit of rain well after the performance ended. 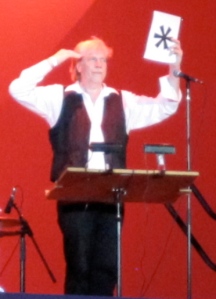 Chatham used a playful asterisk to mark certain changes in the piece for the players.

Last night’s premiere was a reworking of the original A Crimson Grail, which was written for 400 guitars and performed indoors in Paris’ landmark Sacré-Coeur Basilica in 2005,  before an audience of 10,000 — while some 100,000 more watched on national TV.

The three-part work created a wall of sound with guitar tremolos, laced with distinct melodies that floated over and wove into the drone. Chatham conducted from a podium raised above the front row of players, assisted by four section leaders — David Daniell (improvisational guitarist and composer), John King (guitarist and composer who’s worked with Kronos Quartet and the Bang on a Can All-Stars, among others), Seth Olinsky (Akron/Family) and Ned Sublette (The Ned Sublette Band) — who passed on his instructions to the players and kept them together. (Among the players was a neighbor of mine, digital artisan Richard Lainhart, playing a white Steinberger guitar.)

The sound mix was handled beautifully, balancing the nearly ear-splitting drone sections well with the melodic lines. Some people in the crowd put fingers in their ears or inserted ear plugs during the performance. Sure, it was LOUD, but the sound was manageable and arced from soft to loud and back again smoothly.

The changing textures of the piece, coupled with the onset of nightfall created a magical effect that kept the majority of the audience deeply engaged with the piece. The overall effect was blissful, hypnotic and spiritual.

The park was absolutely packed with curious listeners. It was the first show in this still-young Out of Doors season where I’ve seen long lines of people waiting to get in an hour before the show started. Many people were turned away from the seating area and had to listen from South Plaza or from the street.

The lucky people who got in early and got seats were doubly lucky because they also got a taste of Bang on a Can‘s Asphalt Orchestra, the avant-garde marching band that made its debut on Wednesday. Asphalt, which has been, well, marching around Lincoln Center campus for a half hour before each night’s mainstage show, last night took its show right into Damrosh Park, give the captive audience a taste of its energetic sound. (Your last chance to see Asphalt Orchestra, for now at least, is at 7 tonight, starting at Broadway Plaza in front of Alice Tully Hall at Broadway and West 65th Street.)

The guitarists were lined up two deep under canopies in front of the stage and the north and south sides of Damrosch Park.