Femi Kuti & The Positive Force may have been the headline act at tonight’s special Monday night edition of Midsummer Night Swing, but the cast members from Fela! on Broadway who taught the preshow dance lesson were just as big a draw — and equally exciting — for many in the audience. 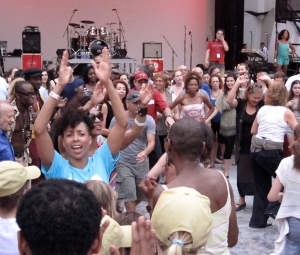 Sahr Ngaujah, who created the title role of Fela Anikulapo Kuti off-Broadway, and shares the role on Broadway with Kevin Mambo, joined Fela! dance captain Jill Vallery and a host of dancers from the stage spectacle as they whipped the wannabe Afrobeat dancers into a frenzy. Many of the people in the audience, like yours truly, ably demonstrated that they had two left feet when it came to following the athletic and intricate steps involved. But that didn’t deter many from trying. But the real test came later, when the real dance party started. Click through for more photos. END_OF_DOCUMENT_TOKEN_TO_BE_REPLACED