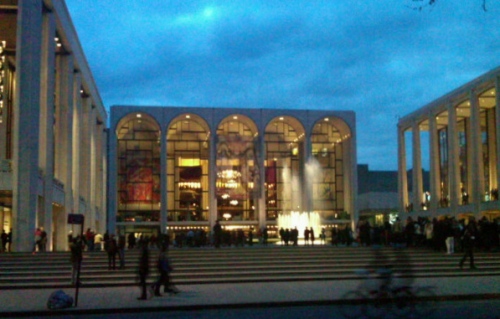 If the smash Broadway musical Fela! gave you the itch to hear more Afrobeat music, Lincoln Center’s Midsummer Night Swing lineup for this summer, announced today, will help you scratch it. Fela Kuti’s son Femi and his band Positive Force are scheduled to perform on July 12, with a a lesson in how to dance to the driving African beat taught by Maija Garcia, associate choreographer of the musical and a DJ set by Sahr Ngaujah, the actor who created the title role in Fela! 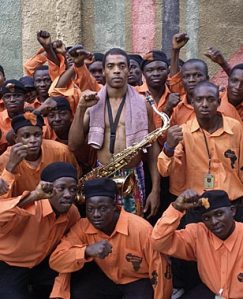 And if Afrobeat’s not your cup of tea, there are plenty of other styles of music and dance on offer during the 15 nights of performances at Lincoln Center’s Damrosch Park.

Bragin says: “The series offers an array of dance music styles including salsa, swing, disco, and tango.  For the first time this summer we are presenting a night of bhangra, the frenetic, hypnotic dance music from India by way of London and New York.  Famed DJ Rekha will spin bhangra and Bollywood beats with her special guest Red Baraat for a dance party like no other on July 8th.  Another highlight will be an appearance by Femi Kuti & Positive Force on July 12th.  Kuti, the son of Fela Anikulapo Kuti of FELA! on Broadway fame, extends the tradition with his contemporary Afrobeat sound.”

Tickets and passes are on sale now. Multi-evening Swing Passes are priced at $90 for six nights, and $160 for the full season.  Tickets for individual evening events are $17.

The Swing box office is located in the lobby of Avery Fisher Hall, Broadway and 65th Street. Tickets for individual events and passes can be purchased in advance or on the night of the event at a box office in Damrosch Park.  Tickets and passes can also be purchased through CenterCharge at (212) 721-6500, or online. Twitter users can follow Midsummer Night Swing  @LCSwing for ongoing news and updates.

Click through to the jump for more info and the full lineup:

Midsummer Night Swing makes every effort to present each event of the season, as long as unpredictable weather allows. Performance cancellations due to inclement weather will not be announced until 8:30 pm on show night. In the case of cancellation, ticket holders are entitled to exchange for another performance or a refund. Pass holders are not entitled to a refund. If a performance has begun and is canceled after 8:30 pm, exchanges or refunds are not offered.

The schedule for Midsummer Night Swing:

Tuesday, June 29
Battle of the Bands: George Gee Orchestra vs. The Bill Elliott Swing Orchestra Big Band Swing
When the hard-driving East Coast swing of George Gee meets the smooth swing of West Coaster Bill Elliott for the first time in ten years, there will be an explosion – on the dance floor!  Both orchestras swing with the best of them, with New York-based Gee and his band specializing in the booming swing of Gee’s idol, Count Basie.  Bill Elliott’s swing comes from his love of authentic arrangements from swing’s golden era of the 1930s and early 40s, and he adds his original compositions to make a night of sophisticated, light-hearted music that is eminently danceable.  A throwdown by the masters – may the best orchestra win.
Lesson: Randy Caravella
DJ: Ryan Swift

Wednesday, June 30
narcotango Tango Electronico                                                       **New York Debut**
narcotango plays original music which melds classic tango with modern electronic sound in an embrace as deep as any found on the dance floor.  Group founder and bandoneon player Carlos Libedinsky describes the music of narcotango as exuding the pull of a powerful addiction, like when tango dancers are exhausted from hours of dancing yet cannot pull apart because so powerful is their love of the music and the movement.  Based in its native Buenos Aires, narcotango is popular in Europe and South America, and with its Midsummer Night Swing appearance it is set to seduce New York as well.
Lesson:  Eva Carrozza
DJ: Yesim “La Turca”
Sponsored by Capital One Bank

Tuesday, July 6
New Orleans Moonshiners New Orleans Jazz, Swing            **New York Debut**
Not only is it their first time in New York, this Swing engagement is the Moonshiners first gig outside of Louisiana.  Playing traditional New Orleans jazz and small band swing, the tight-knit unit of twenty-somethings channel the spirit of Louis Armstrong and Anthony Bechet while lifting their listeners feet up off the floor to dance.
Lesson: Paolo “P Lindy” Lanna
DJ: Tomo Tanaka

Note: one band set at 8pm
The hypnotic club music based on Punjabi folk music – bhangra – has become a DJ-driven music in the US, largely due to the work of DJ Rehka, the “Ambassador of Bhangra” (New York Times). Rehka’s Basement Bhangra party is legendary for its mix of native beats and Bollywood disco, infused with elements of hip-hop and Jamaican dancehall.  Her special guest on
July 8th will be Red Baraat, the pre-eminent dhol ‘n’ brass band in the US. Red Baraat plays a raucous blend of bhangra and brass funk that makes for a powerful live sound and explosive fun on the dance floor.
Lesson: Reena Shah
DJ: DJ Rehka

Friday, July 9
Tony Swing Merengue
Born Juan Antonio Morales, Tony Swing is a veteran in the world of Dominican merengue. He fronted many of the best internationally-known merengue bands, including Oro Solido and Pochy y su Cocoband, for more than ten years before turning to a film career and solo projects.  After several years away from the scene, Swing is back with a new CD, a new band and the same lightening-quick dance sound that his fans adore.
Lesson: Melanie La Patin and Tony Meredith
DJ: William Otero

Monday, July 12
Femi Kuti & Positive Force Afrobeat, Afro House
Femi Kuti’s late father, Fela Anikulapo Fela of Broadway FELA! fame, is credited with inventing the hypnotic Nigerian funk style known as Afrobeat.  But while the son learned from the father, Femi Kuti and his band, Positive Force, have taken the genre further by mixing Afrobeat with contemporary soul-jazz nuances.  Kuti’s Lagos nightclub, Shrine, is an incubator for both this infectious music as well as for the fractious political atmosphere out of which this music is born.
Lesson: Maija Garcia, associate choreographer of FELA!
DJ: Sahr Ngaujah, from the cast of FELA!

Wednesday, July 14
Catherine Russell and Cat & the Hounds Swing Band   Jazz, Small Band Swing, Blues
Catherine Russell is a jazz and blues singer with a voice that is dusky, feminine and soulful.  The daughter of Louis Armstrong’s longtime musical director, Luis Russell, and outstanding bassist and vocalist Carline Ray, her talent can stand comparison to her prodigiously-gifted forebears.
Russell has performed with such noted artists as Cyndi Lauper, Steely Dan and David Bowie.  Her first two CDs – Cat and Sentimental Streak – won accolades from sources as diverse as The Wall Street Journal and France’s Prix du Jazz Vocal 2008.  Her newest CD, Inside This Heart of Mine, was just released.
Lesson: Joe Palmer
DJ: Phast Phreddie the Boogaloo Omnibus
Sponsored by Capital One Bank

Thursday, July 15
Losers Lounge: “Ladies Night”  Disco
The Losers Lounge is a collective of some of New York’s best musicians and singers who perform the great songs of the 60s, 70s and 80s.  According to The New York Times, they “honor pop stars from these eras and validate the zeal of music fans.”  When Losers Lounge performed a night of disco-era classics two years ago at Swing the dancers hustled themselves into the ground.  Honoring the great women of disco – Donna Summer, Vicki Sue Robinson, Sister Sledge, Martha Wash, et al. – is guaranteed to bring on a boogie marathon.
Lesson: Maria Torres
DJ: Belinda Becker

Friday, July 16
La Excelencia Salsa Dura
New York’s new La Excelencia plays sizzling salsa dura, as raw and tough as the city it calls home.  The voices are loud, the percussion louder, the horns loudest of all.  Their lyrics are about the struggle of life in the city.  La Excelencia is, according to Latin Beat magazine, “the real thing”, music to be celebrated, listened to, danced to.
Lesson: Carlos Koenig
DJ: DJ Andreas

Saturday, July 17
Harlem Renaissance Orchestra with special guest Frank Wess: “A Tribute to Illinois Jacquet” Big Band Swing
Jump to the big band sound of the Harlem Renaissance Orchestra, a group that was formed more than twenty years ago to revive the great sounds from the big band era.  The band recognizes the masters of the big band sound: Benny Goodman, Duke Ellington, Count Basie, Lionel Hampton and many others, and plays their music like it was yesterday.  The band’s special guest will be Frank Wess, the great saxophonist, flutist and NEA Jazz Master who has played with Billy Eckstine, Count Basie, Clark Terry, and, at age 88, is still going strong.
Lesson: Margaret Batiuchok
DJ: Larry Kang

On the 17th there will also be the 2nd Annual Ambassador’s Prize dance contest, honoring the late Frankie Manning, lindy hopper extraordinaire.

Saturday, July 17 from 3:00 to 4:30pm
Kids’ Day at Midsummer Night Swing
Free
Ballroom, Tango, Swing for kids
Kids can get in on the act with a special afternoon session (ideal for the entire family) with the famed dance teacher Pierre Dulaine, featured in the documentary “Mad Hot Ballroom.”  He’ll get youngsters off on the right foot, teaching them the basics of ballroom, tango and swing.
Sponsored by Target®

Boogie Nights! Special Event July 15
In conjunction with Midsummer Night Swing, the Young Patrons of Lincoln Center (YPLC) host an annual outdoor bash in Damrosch Park.  Designed for young professionals in their twenties through early forties, YPLC’s Boogie Nights! includes an open bar of specialty cocktails and gourmet hors d’oeuvres from neighborhood restaurants. Guests will raise a toast to summer at the home of Fashion Week, and experience one of the hottest social events in the city.  For more information and tickets visit LincolnCenter.org/YPLC or email yplc@lincolncenter.org.

Midsummer Night Swing is made possible in part by grants from Daisy and Paul Soros and Charina Endowment Fund.

Operation of Lincoln Center’s public plazas is supported in part with public funds provided by the City of New York.

Movado is an Official Sponsor of Lincoln Center, Inc.

Continental Airlines is the Official Airline of Lincoln Center, Inc.

MetLife is the National Sponsor of Lincoln Center, Inc.

“Summer at Lincoln Center” is sponsored by Diet Pepsi and The Wall Street Journal.

Midsummer Night Swing is a presentation of Lincoln Center for the Performing Arts, Inc. (LPCA), which serves three primary roles: presenter of superb artistic programming, national leader in arts and education and community relations, and manager of the Lincoln Center campus. As a presenter of over 400 events annually, LCPA’s programs include American Songbook, Great Performers, Lincoln Center Festival, the Mostly Mozart Festival, Lincoln Center Out of Doors and Live From Lincoln Center.  In addition, LCPA is leading a series of major capital projects on behalf of the resident organizations across the campus.