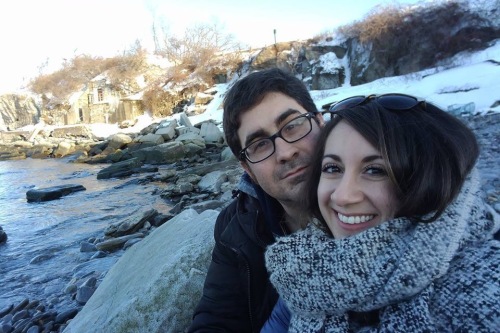 The Columbia University music faculty has set up a GoFundMe campaign for composer Mary Kouyoumdjian’s possible “emergency costs” in the wake of the death of her fiancé, composer and Alarm Will Sound founding member Matt Marks.

To view the campaign and donate, GO HERE.

On the Slipped Disc New Music blog, commenter trolls (I guess there are trolls in every part of the internet, but this stunned me) have been horribly and unnecessarily brutal in questioning or condemning the fund-raising campaign for Kouyoumdjian.

I don’t know what unexpected expenses she might be facing as a result of her fiancé’s death, but it seems to me that it’s an individual’s prerogative to contribute to any cause he or she chooses.

Although I haven’t seen a wedding date for the couple mentioned, recent social media posts indicate the couple must have set one. There were mentions of picking out a dress and tasting wedding cakes, things that generally aren’t done prospectively,

Marks’ death Friday morning remains officially unexplained, though his sister, Suzanne Marques, in a lovingly gut-wrenching Facebook tribute to her “baby brother,” discusses a serious health issue he faced. Her exposition appears to provide at least a clue to what might have happened.

It cast something of a pall on this weekend’s Bang on a Can Marathon — a 10-plus hour concert of New Music, the world that nurtures the music of Marks and Kouyoumdjian — at New York University’s Skirball Performing Arts Center, It was addressed in a beautiful statement read by Bang on a Can All-Stars member Ken Thomson.

This entry was posted in Contemporary Classical, Music, News, RIP and tagged Bang on a Can, gofundme, mary kouyoumdjian, Matt Marks, New Music. Bookmark the permalink.

One response to “UPDATE: Fund for composer Mary Kouyoumdjian after death of fiancé Matt Marks passes $33,000”