Bang on a Can Marathon moving to Brooklyn with promise of ‘politics, resistance and love’ 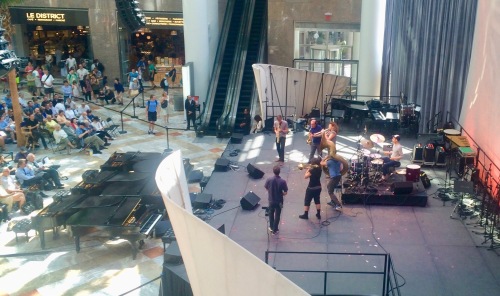 Asphalt Orchestra performing at the 2015 Bang on a Can Marathon at the Winter Garden in Manhattan on June 21. (© 2015 Steven P. Marsh/willyoumissme.com)

Bang on a Can, the premiere purveyor of New Music in New York City, is rebooting its  iconic Marathon concert with a move to Brooklyn in May, after a year off. Organizers promise it will be an “8-hour marathon concert of politics, resistance, and love.”

The Marathon lost its downtown Manhattan home of a decade at the Winter Garden of the World Financial Center (now renamed Brookfield Place). The organizers skipped a 2016 edition, but promised a new location for the its 30th anniversary this year.

They delivered on that promise Thursday, announcing that the genre-busting musical celebration lands at the Brooklyn Museum on May 6, from 2-10 p.m.

The Marathon was somewhat itinerant prior to its 10-year run at the Winter Garden, spending time at mostly Manhattan venues, ranging from the Soho art gallery where it started in 1987, to the Abrons Arts Center in the Lower East Side, to Lincoln Center’s Alice Tully Hall.

Despite its Manhattan roots, this won’t be the first time the Marathon was held in Brooklyn. In 2000 and 2001, it was staged at BAM, just a block or two away from Bang on a Can’s longtime headquarters on Hanson Place in Fort Greene.

The Winter Garden spoiled listeners with its free-admission policy. This year’s Marathon  is billed as “free with Brooklyn Museum admission.” General admission to the museum is a relatively modest $16, and free after 5 p.m. on Marathon day as part of the Target First Saturday program.

Bang on a Can co-founders Michael Gordon, David Lang, and Julia Wolfe issued a statement on the upcoming Marathon:

Thirty years ago we started dreaming of the world we wanted to live in. It would be a kind of utopia for music: all the boundaries between composers would come down, all the boundaries between genres would come down, all the boundaries between musicians and audience would come down. Then we started trying to build it. Building a utopia is a political act – it pushes people to change. It is also an act of resistance to the things that keep us apart, and it is an act of love, bringing ideas and sounds and people together. This year, we couldn’t have found a better home or partner than the Brooklyn Museum, whose slate of 2017 Year of Yes exhibitions is dedicated to artists and ideas, and especially women, who have passionately shared a parallel path. Please come celebrate our 30th anniversary with us, in an 8-hour marathon concert of politics, resistance, and love.

The Marathon, which has consistently been a way to discover new artists and see old favorites, features a nonstop schedule as an element of a museum program called “A Year of Yes: Reimagining Feminism.”

“A Year of Yes,” which celebrates the 10th anniversary of the Elizabeth A. Sackler Center for Feminist Art, began in October.

This year’s Marathon will feature the work of a number of women artists, including Meredith Monk, who will lead an all-women vocal ensemble,  performing brand new music, singwriter-violinist-composer Carla Kihlstedt,  Joan La Barbara’s “A Murmuration for Chibok,” which honors and keeps in the present over 250 school girls abducted in Chibok, Nigeria by Boko Haram in 2014, and the music of Merill Garbus (tUnE-yArDs) and Kim Deal (the Pixies), along with BoaC co-founder Wolfe’s folk ballad “Steel Hammer,” based on over 200 versions of the John Henry ballad.

More artists and works are to be announced later in February.