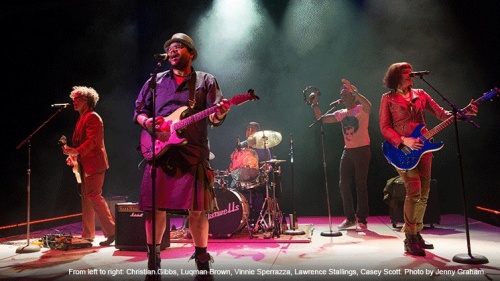 If you find yourself in Oregon before the end of August, be sure to set aside a few hours to check out the world premiere of the latest musical play by Stew and Heidi Rodewald of The Negro Problem at the Oregon Shakespeare Festival in Ashland.

For fans, “Family Album” will seem familiar, as they’ve incorporated songs fans have heard TNP play in concert or in other, less-structured, theater pieces over the years. And charismatic guitarist Christian Gibbs, who was a linchpin in Stew and Heidi’s breakthrough show, “Passing Strange,” steps forward to take a larger role in this show.

You’ll see what I mean by the familiarity when you watch the show’s video trailer and read the review in the Los Angeles Times. After you’ve had a look, go here for more information and  to buy tickets.

The show was created with director Joanna Settle, a longtime Stew-and-Heidi collaborator who now heads the theater school at Philadelphia’s University of the Arts.

Tickets have been selling well, but as of today, there are 16 performance dates for which seats are still available. Prices range from $25 to $99. Go here now for more information and tickets. The run ends Aug. 31.