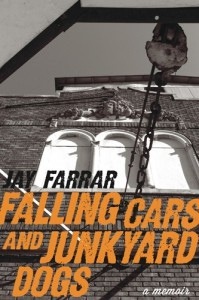 Uncle Tupelo co-founder Jay Farrar‘s easy-reading memoir, Falling Cars and Junkyard Dogs, came out in March, but it landed rather quietly — at least in my world.

It was only a few days ago that I really became aware of the collection of vignettes by the ultra-serious Farrar. Some of the reviews have been unkind, but that didn’t stop me from buying it and devouring it in a matter of a few hours.

Farrar made great music in Uncle Tupelo, and has continued on a reverential path since the band’s acrimonious 1994 breakup. But that’s not the subject of this collection of short passages from just about every part of his life but the Uncle Tupelo part.

His prose, like his songs, is a touch too serious, and at times the book seems stiff. But it’s clearly Jay’s voice. There’s no question in my mind he wrote this without the help of a ghostwriter. The anecdotes, about his early interest in music, his mom and dad (Pops Farrar) and other family members, seem authentic. But they’re a bit sterile at the same time, almost as if he’s written a book to satisfy the fans and others who want to get a piece of him without actually surrendering his inner self.

While it’s a little curious, it seems consistent with the Jay I met when I interviewed him on the earliest days of Son Volt — a friendly and honest, but cautious and extremely private, guy.

So if you turn to the book for major insights, revelations and serious dirt, you’ll be disappointed. In fact, if you’re interested in knowing what Jay thinks about his music, how he makes it or what motivates him to create it, you’ll be unsatisfied, too.

Even so, the stories he tells of growing up in a relatively poor family in the Midwest says a lot about why he became the man he is.

I have to admit that Jeff Tweedy was the reason I picked up the book. I wanted, finally, to know how Jay felt about his longtime friend and cofounder in Uncle Tupelo, who took most of Tupelo’s members with him to create the extremely popular Wilco.

He mentions the band by name for the first time nearly halfway through the book, and only twice more after that.

Jeff, on the other hand, is never named. But Jay sure doesn’t leave him out, referring to Jeff, somewhat disingenuously as “the bass player” in an anecdote that starts out as a story about Jay and Pops’ trips to junkyards and segues into a bitter tale of an unnamed “touring band” that is Uncle Tupelo:

The junkyard-ethos era with my father continued on through my early twenties, till I had enough money to buy a car outside of the salvage realm. I was in a touring band then, in the early 1990s. The last junkyard sojourn with my father was on the same day I left that touring band for the second time. The first time was when the bass player woke up my girlfriend, who was sleeping on the back equipment van bench, to profess his love for her while I was in charge of driving up front. The reason for leaving the band the aforementioned second time was for artistic and band direction differences of opinion. I spoke the words, “I have the desire to be your friend. It’s just not possible in the context of this band.” The bass player responded with belligerent vitriol. I walked away … Even then I was aware that nothing in the world could be more pathetic than two guys throwing punches in the early afternoon in a decrepit apartment on Eleventh Street in Belleville, Illinois.

Jay goes on to slam the nameless Jeff, who has spoken often of the breakup, for his “erroneous accounts.” Jay ultimately tries to dismiss thoughts about the breakup as “decaying nostalgia,” adding, “So it goes for old cars and worn out bands.”

So take that, Jeff!

I have to admit that I was on Team Jay after the breakup. He struck me as the more mature and genuine artist of the two, someone interested in making something more than just party music. And Jeff’s legendarily bad treatment of members of Wilco, including Jay Bennett, pushed me further into Jay’s corner.

At times, I felt that Jeff had a great deal of responsibility for Jay Bennett’s tragic death. While I knew it wasn’t as simple that, Jeff’s addiction-fueled (as we all discovered to no surprise) bad behavior
made it easy for me to dismiss him for awhile.

My opinion of Jeff has changed as he grew as an artist and got his head on straighter and his demons under some semblance of control. Wilco’s Solid Sound Festival, every edition of which I’ve attended over the last four years, did a lot to bolster Jeff’s image in my mind.

While I’m still on Team Jay, I’ve become very open to Jeff and see him as equally brilliant — and obviously more successful, whatever that means.

In the end, Jay’s book really seems to show that he hasn’t grown as much as Jeff. And, I think, until he comes to grips with his feelings a bit more directly, Jay’s art, sadly, will always take a backseat to Jeff’s.