The married music makers open up about new album Wassaic Way, working with Jeff Tweedy and keeping their family life in balance after 14 years of marriage

Sarah Lee Guthrie and Johnny Irion perform atop an artwork in a gallery at the Massachusetts Museum of Contemporary Art in North Adams, Mass., during the Solid Sound festival in 2011. (Photo © 2011, Steven P. Marsh)

Alongside a two-lane back road in the Berkshires region of Western Massachusetts sits a solid, simple frame home.

Sited on what appears to be at least a couple of acres atop a hill, its nearest neighbor is farther than you can throw a stone, but not so far as to be out of sight.

The house is far enough from the main highway to provide a peaceful retreat, but with easy access to civilization — whether you consider that North Adams, Pittsfield, Boston or beyond.

The silence — at least outdoors, anyway — is broken only by the occasional animal noise or the air-horn warning and rumble of one of the freight trains that pass through on a regular basis.

Inside, it’s a very different story.

That’s where Sarah Lee Guthrie and Johnny Irion are raising their kids — “counting the cousins, on any given day there are four to six. But normally, two: Olivia’s 11, Sophia’s 6,” Johnny told Will You Miss Me When I’m Gone? in an exclusive interview.

And it’s home base for their business. Downstairs, in a studio-basement-rehearsal space, the married musical duo practice and record their music.

Things are really happening for Sarah Lee and Johnny. They seem like a duo on the verge of overnight success — albeit after one very long and ofttimes sleepless night.

But we’ll get to that in a minute. First, let’s clear up something: While Sarah Lee and Johnny aren’t household names, there’s something about them that rings the bell. 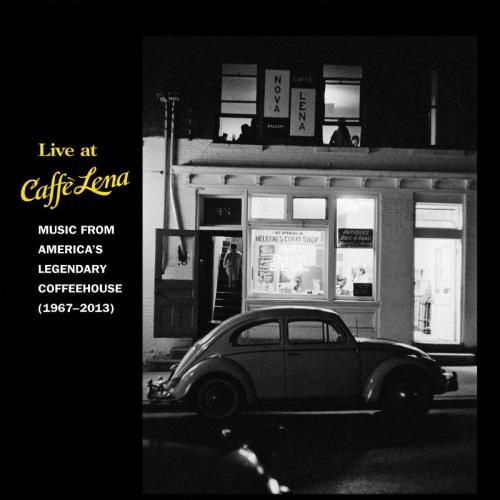 Live At Caffè Lena: Music From America’s Legendary Coffeehouse, 1967-2013 is slated for release on Sept. 24.

A review of Live At Caffè Lena: Music From America’s Legendary Coffeehouse, 1967-2013, with buying and streaming links after the jump

Devonsquare, the sweet-harmonizing folk-rock trio, first piqued my curiosity about Lena and Bill Spencer’s cafe (or caffè, as they dubbed it, using two f’s) with their song “Caffè Lena” on the  1987 album Walking on Ice.

Caffè Lena was a place of mythical proportions to me then. For one reason or another, I never found myself in Saratoga Springs.

After all, I live close to The Turning Point in Piermont, N.Y., a music cafe that is, while 16 years younger than Caffè Lena, has a similar mission and musical profile.

And then there was the Towne Crier in Pawling, N.Y.,  from 1972 until closing in June with plans to reopen soon in Beacon. That gave me a backup option just a bit farther afield than The Turning Point.

So  I never got myself motivated sufficiently to make the trek to Saratoga Springs.

I should have known I was missing out. And now the Tompkins Square record label has  shoved into my face some very real evidence of exactly how much I’ve missed. END_OF_DOCUMENT_TOKEN_TO_BE_REPLACED

Sarah Lee Guthrie and Johnny Irion are making a Hudson Valley appearance on Saturday, Aug. 3 at the all-free Wassaic Festival in Dutchess County, which starts today and runs through Sunday (Aug. 2-4).

There’s something nice about hitting the namesake town in the early stages of touring their latest album, the seriously charming Wassaic Way. The husband-and-wife-duo (she’s daughter of Arlo Guthrie and granddaughter of Woody Guthrie) are really proud of the self-released album (which is to be released Aug. 6) they made with Wilco’s Jeff Tweedy and Pat Sansone.

Stay tuned for a full interview with the creative couple. But for now, I just wanted to alert you to their gig coming Saturday. I’ve never been to the Wassaic Project, a center that aims to create context for art making and strengthening local community by increasing social and cultural capital through inspiration, promotion and creation of contemporary visual and performing art. It’s at the very last stop on Metro-North Railroad’s Harlem Line. This is the sixth year for the festival, a free, three-day event featuring art, music, dance, and community featuring over 100 artists, 25 bands, film screenings, dance performances and more.

The Wassaic Project is at The Maxon Mills,  37 Furnace Bank Road , Wassaic, NY 12592. It’s in walking distance of the Wassaic Metro-North station with connections from Grand Central Terminal. ADMISSION IS FREE, but tickets are required for some events. Check the full schedule here.