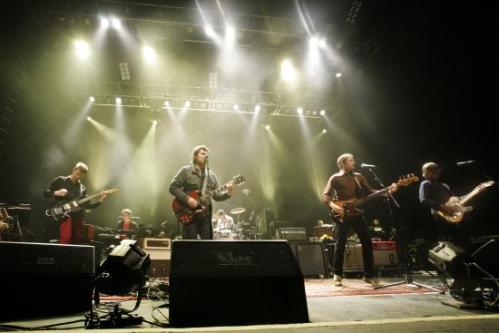 Adventurous Chicago-based band Wilco has announced it will curate and headline the new Solid Sound Festival, an independently promoted and ticketed festival of music, art and comedy for three days this summer — Aug. 13-15 — at the Massachusetts Museum of Contemporary Art (MASS MoCA) in North Adams, Mass. Early-bird tickets ($86.50 including fees and parking) will be available starting at 10 am ET tomorrow on the band’s web site.

Wilco headlines the weekend, giving its only East Coast performance of the summer. Wilco side projects, including Glenn Kotche‘s On Fillmore, The Nels Cline Singers, The Autumn Defense featuring John Stirratt and Pat Sansone and Mikael Jorgensen‘s Pronto.

The area is beautiful, with plenty of outdoor activities nearby as well as cultural attractions in Williamstown to the west.

Ticketholders will have full access to the spectacular MASS MoCA campus, which offers 150,000 square feet of galleries. MASS MoCA, a renovated 19th century textile mill, is the largest center for contemporary visual and performing arts in the U.S. Art on display in the galleries during the festival includes the Sol LeWitt Retrospective, Inigo Manglano Ovalleʼs Gravity is a Force to be Reckoned with, Petah Coyneʼs Material World: Sculpture to Environment, Leonard Nimoyʼs Secret Selves and a new installation by Michael Oatman.

Stay tuned to Will You Miss Me When I’m Gone? for more details as they become available.