Two takes on meditation: MONO and the Wordless Music Orchestra

Bodies in motion: MONO at the Society for Ethical Culture. (Photo by SPM. All Rights reserved.)

Perhaps it was the venue (the churchlike Society for Ethical Culture on Central Park West in Manhattan), or perhaps it was the fact that the opening act was a string orchestra, but the crowd at Japanese noise rock band MONO‘s sold-out 10th anniversary show last night (the show repeats tonight at Le Poisson Rouge in the West Village) was about as reverential as they come. One fan positioned near the front in the center section insisted on standing up during the performance and was eventually ejected.

It was good to see a rock audience pay attention to the music, remarkable, in fact. It’s in part due to the decisive impact that Wordless Music, which presented last night’s show, is having on New York’s music scene. Promoter Ronen Givony is certainly not the first person to pair classical and rock artists on a bill or to bring those two divergent musical worlds together. (Think of Procol Harum recording an album with Edmonton Symphony Orchestra, for instance, or many of Bang on a Can’s show, to name just two.) But Wordless Music has really struck a chord over and over again in its short life.  (The inaugural Wordless Music show as Sept. 18, 2006, and featured Glenn Kotche, Nels Cline, Jenn Lin and Elliot Sharp.)

The instrumental quartet MONO has a huge cult following here in the U.S.

I have to admit I knew little about them before this show was announced, but after a friend called it a must-see, I became very curious. That curiosity payed off. MONO played a tight set of 10 songs, half from their fifth and latest album, Hymn to the Immortal Wind. They were backed by some of the players from the Wordless Music Orchestra that opened the show with the New York/East Coast premiere of Estonian composer Arvo Pärt’s Symphony No. 4 (“Los Angeles”).

The band, all wearing black, took the stage without a word and ripped through the set with incredible energy and nary a word. MONO is a band that really knows how to toy with changes in volume, starting the set off with the quiet-at-first “Ashes in the Snow” before building a wall of sound that ripped through the house. Just at the moment when the band’s sonic assault seemed to approach the unbearable, they dialed it back, sometimes with basist Tamaki Kunishi switching to grand piano for contemplative moments.

MONO wrapped the set up with the explosive final number from the new album, “Everlasting Light,” another beautiful number that starts softly piano and builds to amind-bending crescendo. That brought the crowd to its feet with a standing ovation. After walking offstage — with a bow and a hug for strings conductor Jeff Milarsky,  Tamaki, guitarists Takaakira “Taka” Goto and Yoda, and drummer Yasunori Takada left the stage without an encore.

It was interesting to note that although the band is known for being very involved with fans, the quartet played with little eye contact or interaction with the audience, spending most of the time with their heads down, hunched over instruments, hair in their eyes. 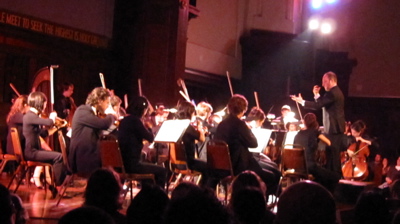 It was heartening to see that most of the seats were filled for the opening act. (I can only hope that it wasn’t just the desire to get a good seat in the general-admission house that got people there early.) The Wordless Music Orchestra did not disappoint, playing the Pärt — which features harp and tympani and is dedicated to Mikhail Khodorkovsky, a Russian oil executive who was accused of fraud and is imprisoned in Siberia for political reasons — superbly.

The meditative quality of Pärt’s symphony was a perfect appetizer for MONO, whose music, even at its loudest, has a mesmerizing, internally focused quality about it.

While I am a huge fan of Pärt’s mystical take on minimalism, I’m still digesting his latest symphony. It was lovely, but didn’t grab me immediately the way much of his previous work has. I have a feeling this piece requires some study. While there are no official recordings yet available of the work that I can find, Pärt’s publisher, Universal Editions, has made a study score available online for free. I know I’ll be studying that to dig deeper into this major and important new work.

This entry was posted in Contemporary, Music, Pop and Rock. Bookmark the permalink.