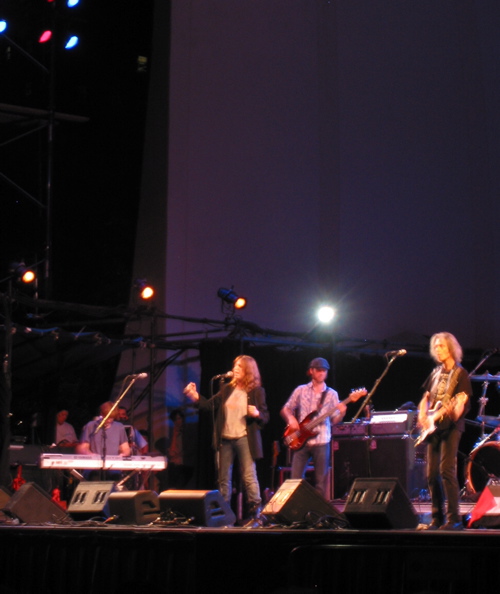 Patti Smith at Lincoln Center Out of Doors 2008. (Photo by SPM. All rights reserved.)

It’s here and it’s awesome. Clear you calendars and pray for good weather. This year’s edition of free music at Lincoln Center Out of Doors kicks off Aug. 5, and may be the best yet! Among other things, it features the debut of Bang on a Can’s Asphalt Orchestra — performing, in a special treat for Passing Strange fans (Strange Freaks), the world premiere of a piece by Stew and Heidi Rodewald — the Dave Brubeck Quartet, another shot at Rhys Chatham‘s A Crimson Veil for 200 electric guitarists, which was canceled at the last minute last year, PLUS a performance by Stew and Heidi and The Broadway Problem!

Now that I’ve had time to chew on the schedule all day, I have to point out a few more not-to-be-missed performers: the amazing Liquid Liquid — the NYC post-punk combo whose percussive sounds have long been club faves and whose track “Cavern” formed the heart of Grandmaster Flash and Melle Mel‘s “White Lines (Don’t Do It)” — The Derek Trucks Band, Plastic People of the Universe, and Otto, the Brazilian singer and percussionist who brought the house down at the Red, Hot + Rio 2: The Next Generation of Samba Soul show at BAM last December.

It’s Bill Bragin‘s second season as director of public programming at Lincoln Center, a position he took in January 2008 after more than six years as director of Joe’s Pub at the Public Theater downtown. His uptown job makes him responsible for Lincoln Center’s two major alfresco programs  — Midsummer Night Swing and Lincoln Center Out of Doors — but keeps him involved in other projects as well.

Bill’s choices for both series were great last season. And his proprietorship of the outdoor programming brought with it an emphasis on interactivity and lots of online features including links to information and sound samples and videos of the artists and thorough background on how to get there, what to bring and what to do in case of bad weather.

His outdoor dance program, Midsummer Night Swing, (free to listen, $145 for a season pass onto the dance floor, with single tickets priced at $15) has already been announced. It kicks off on July 7 with Kermit Ruffin and the Barbecue Swingers, and just gets better as the month goes on.  Chubby Checker is in the mix, along with Occidental Brothers Dance Band International, Samba Mapangala & Virunga and closing the dance season on July 25 with the Harlem Renaissance Orchestra. Bill worked his downtown connections last year to bring artists like Nellie McKay to the outdoor dance floor in a swing-combo format.

His most ambitious idea last season, a highly anticipated all-star program titled “Wordless Music: 800 Years of Minimalism-The Spiritual Transcendent,” was marred by heavy rains. The weather forced Bill to make a crushing last-minute decision to pull the plug, quite literally, on the advertised performance of Rhys Chatham’s A Crimson Veil, played by 200 electric guitarists. But Bill’s taking another shot at the weather gods, and has included it in this year’s schedule.

See the complete lineup (NOW IMPROVED AND EASIER TO READ!) after the jump: END_OF_DOCUMENT_TOKEN_TO_BE_REPLACED