Speed the Plough takes over Union Hall next Friday 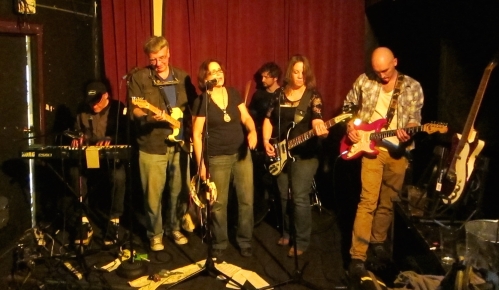 Speed the Plough at The Fifth Estate in Brooklyn. (© 2014, Steven P. Marsh/willyoumissme.com)

It’s been almost a year since I’ve seen Speed the Plough play live. It’s not that the band hasn’t been playing — while STP doesn’t mount major tours, there have been several gigs in the area since that appearance in May at The Fifth Estate in Brooklyn. Scheduling just hasn’t worked out for me.

So I’m looking forward to seeing them at Brooklyn’s Union Hall on Friday, March 20 — and making sure the scheduling works out this time.

The New Jersey chamber pop family band will be joined by two other notable outfits: the indie super group Heroes of Toolik and Jersey-rooted Deena & the Laughing Boys.

STP and its rhythmic, classically informed pop has been part of my musical life for a long time. I can’t explain that much better than in did in a blurb I was honored to have included in the band’s 2014 retrospective album “The Plough & the Stars”:

In this crazy, uncertain world, there are precious few constants. Speed the Plough is one of them. I feel like I’ve known this band forever, even if I didn’t really discover it until 1996 … It may never displace death or taxes as one of life’s certainties, but the world is a better place with Speed the Plough giving those two a run for the money.

The lineup has changed considerably over the years, but Toni and John Baumgartner have been there all along. And there’s usually been a Demeski (first Feelies drummer Stan Demeski, whose wife Janet is John Baumgartner’s sister, and now their son John) and, for a time, another member of the Feelies, Brenda Sauter, and her husband, Rich Barnes.

Heroes of Toolik is a band that hasn’t been on my radar before, and I can’t imagine why, given its heritage. But it’s there now, for keeps, and should be on your radar, too. It has quite a heritage, drawing its notable members from a bunch of important indie bands: Arad Evans, on guitar and voice, has performed with avant garde icons Rhys Chatham and Glenn Branca; Peter Zummo, on trombone, with the Lounge Lizards; Ernie Brooks, on bass, was in the Modern Lovers; drummer Billy Ficca fropm Television and the Washington Squares; and fiddler Jennifer Coates from Jenny Get Around. The band’s sound has a lot in common with STP, as this clip demonstrates.

Deena Shoshkes is somebody I’ve been planning to write about for awhile. She may be best known as a founder of Eighties indie band the Cucumbers, which was a mainstay of the Hoboken scene centered on Maxwell’s. Her second solo album, “Rock River,” was released just last yea. It’s a delightful collection of 12 tunes  that continues the joyful, almost childlike sound that the Cucumbers created. For a sample of her latest album, tap or click here. 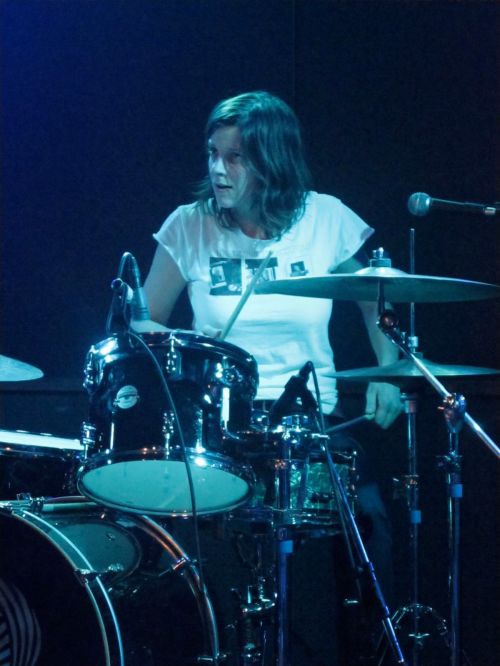 Kristin Mueller is serious locked in with her bandmates in Lucinda Black Bear. (© 2010 Steven P. Marsh/www.willyoumissme.com)

You know Kristin Mueller‘s name. You’ve seen her name on this blog, and have read about her elsewhere. You’ve almost surely seen her behind the drum kit in many great local, national, and international acts — from Lucinda Black Bear and Gloria Deluxe to Dan Zanes and DBR (Daniel Bernard Roumain), along with some of Cynthia Hopkins’ stage shows.

What you may not realize is that she’s an accomplished singer-songwriter, too. But she’s so busy drumming for others that her own work has taken a  back seat. (It’s hard to believe, but it looks like she hadn’t released anything under her name before this year’s Deserts & Long Trails — which you can buy on Bandcamp by tapping or clicking here — since Ports of Call in 2006.)

Here’s a video of “Fault” from Deserts & Long Trails:

If you’ve seen her play, her percussion skills aren’t even slightly in doubt. She’s an energetic drummer who is always laser-focused and locked in on her bandmates. But she’s no slouch as a songwriter, either. While her songs exhibit the colors of indie country and pop rock,  like many of the bands she works with. But she’s followed her own path, resulting in a distinctive, personal take on the genres.

After the jump, read more about where and when Mueller is playing tonight, along with ticket info and links. END_OF_DOCUMENT_TOKEN_TO_BE_REPLACED

What if Julie Doiron had become an athlete? 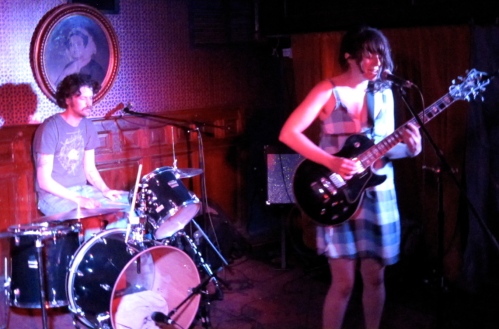 Julie Doiron, with Fred Squire on drums, at Union Hall in Brooklyn on Apri 25, 2009. (Photo by SPM, all rights reserved.)

Julie Doiron has a secret athletic past.

The singer-songwriter (and Eric’s Trip member) from New Brunswick, Canada, says she was quite active in sports while growing up. Her mom worked in the local squash club, so Julie became quite good at that game, as you might expect after playing so many sets for free.

All that squash must account for her ability to really bash the drum kit. She proved that by taking a short stint on the skins during her set last night at Union Hall in Brooklyn, while drummer Fred Squire stepped to the mic to take the lead on songs he wrote. (Fred and Julie recently worked with Mount Eerie‘s latest album, Lost Wisdom.)

But she gave squash up for another sport — swimming, Julie says.

And not just ordinary swimming.

“Um, it was synchronized swimming,” she admits, a bit sheepishly. “I even taught it for awhile. 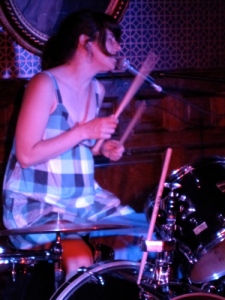 Julie Doiron takes a turn behind the drum kit. (Photo by SPM, all rights reserved.)

“It’s a really hard sport. You have to do a lot of weird stuff underwater while holding your breath for a really long time. While smiling!”

Thanks, Julie! I’m glad you didn’t choose sycnro swimming as a career path.

Julie’s set, meanwhile, was great. She rocked out with a super mix of new songs from her rather gentle new album, I Can Wonder What You Did With Your Day, including Tailor (which she says she wrote almost exclusively with barre chords to celebrate her victory over barre-chord fear) and the Liz Phair-ish Consolaton Prize. But she threw in older songs, too, like Seven, for the many hard-core fans in the audience.

Enjoy these shots from the show. Video may come later today.