The one NYC show you must see tonight: Marah at the Bowery Ballroom (Updated: Now with VIP ticketholder schedule)

If you need a reason to see Marah at the Bowery Ballroom in New York City on Friday night, Sept. 23, check out Rolling Stone’s story:

How Marah Made the Best Americana Album You’ve Never Heard

Marah’s 2008 performance on Late Night With Conan O’Brien should have been the ultimate coming-out party, a shot of high-profile national PR to launch an ambitious new album and U.S. tour. Instead, the January 9th appearance was a death knell for both the Philadelphia roots-rock band and their sixth studio record Angels of Destruction!, released only the day before.

Within a week of the Conan spotlight, Marah split up, with band discord to blame. All of their U.S. dates were scrapped, squandering their best chance yet at the brass ring.

GO HERE TO READ THE REST ON ROLLINGSTONE.COM

If you’re going, here’s the schedule:

Where Marah is headed now

Will You Miss Me When I’m Gone? EXCLUSIVE INTERVIEW

Dave Bielanko and Christine Smith talk about Mountain Minstrelsy, living (almost) off the grid and whether Serge Bielanko will rejoin Marah

How many lives has the rock band Marah had?

It’s hard to say, but it’s one of those bands that has survived surviving changing lineups, internal strife, and wildly fluctuating stylistic directions, all the while being encouraged and praised by celebrities.

Started in Philadelphia, Marah quickly became notable for the stage antics of its core duo, brothers Dave and Serge Bielanko from Philadelphia suburb Conshohocken. They had a loose but seemingly perfectly choreographed stage presence together. Their sound, early on, featured rootsy, Americana-flavored rock and roll with a particular treat for anyone who has an affinity for Philadelphia: jangling banjos played in the style of Philadelphia Mummers Parade string bands.

This is a band that novelist Stephen King in 2005 dubbed “probably the best rock band in America that nobody knows.” They’ve also been the darlings of writers Nick Hornby (who did a tour with the band) and Sarah Vowell.

It’s a band that became pals with Bruce Springsteen and got him to sing and play on one of their albums. And Steve Earle liked them enough to add them to the roster of his now defunct record label.

It’s also a band whose list of former members on Wikipedia at this writing tops out at 20 — a lot for the 19-year-old a band, which generally has performed as a quartet or quintet.

In working there, they’ve discovered something magical, something that has returned the band to its roots in a way, and turned it in a new direction in another way.

Dave and Christine are working with a handful of local musicians in their Pennsylvania hideaway on a project they call Mountain Minstrelsy. (Check it out on Facebook, too.) They’re holed up in an old church that they’re using as a recording studio.

Basically, one of their musical pals in Pennsylvania showed them a book of collected lyrics, “Mountain Minstrelsy (as sung in the Backwoods Settlements, Hunting Cabins and Lumber Camps in the “Black Forest” of Pennsylvania, 1840 – 1923)” by Henry W. Shoemaker. It struck a chord, literally and figuratively, with Dave and Christine, so they set out to build an album around their new music for the found lyrics. They’ve been recording the new-old songs with some of their friends and neighbors for an album they hope to release late this year.

After the jump, read the full interview, plus a video of Dave, Christine and friends in a Mountain Minstrelsy rehearsal.

END_OF_DOCUMENT_TOKEN_TO_BE_REPLACED

Marah and The Madison Square Gardeners rock The Bowery Electric

Marah’s personnel may change, but the sound remains solid 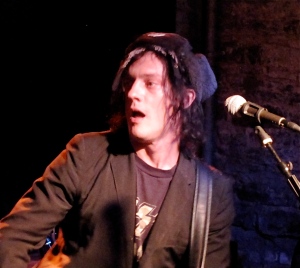 Dave Bielanko is the only original member left in roots-rock band Marah. The Philadelphia-area native has always had trouble keeping a stable lineup, though until the 2008 release of Angels of Destruction!, his older brother and co-songwriter Serge Bielanko (click here for his blog) was a constant.

Nowadays the core of the band, based in Brooklyn, naturally, is Dave and South Ozone Park, Queens, native Christine Smith, who’s been with the band for a few years now. It’s pretty clear that Dave is the driving force, because Marah has kept its artistic core through almost every change in rhythm section (except for that brief Britpop detour on 2002’s Float Away With The Friday Night Gods, which was really just an unfortunate product of Dave choosing the wrong producer).

More on Marah and The Madison Square Gardeners after the jump