Watch starting at 7:30 tonight on Livestream (link after the jump)

It’s hard to believe that singer Tom Rushhas been performing since 1962, but the calendar doesn’t lie.

Tonight he’s marking the milestone with an intimate gathering at a little place in Boston – not far from his old stomping grounds at Club 47 in Cambridge – called Symphony Hall.

It’s a venue where Tom has held forth with his friends many times over the years. It can hold upwards of 2,600 people. Not bad for an old folkie to sell out a joint like that.

Will You Miss Me When I’m Gone? is planning to make the trek to Boston for this incredibly special show.

END_OF_DOCUMENT_TOKEN_TO_BE_REPLACED

Rihannon Giddens of CCD and Adam Matta, the Human Beatbox, join forces on a tune so new it doesn’t yet have a title

The Carolina Chocolate Drops knocked the crowd dead at The Bowery Ballroom in New York City on Friday night, Oct. 12. We have plenty of great visuals to come, but we’ll whet your appetite with this video of a great new tune from CCD’s Rhiannon Giddens and the Human Beatbox, Adam Matta.

Rhiannon explained the her husband is Irish, and she learned some Irish vocal techniques while visiting his family. She put them to great use. 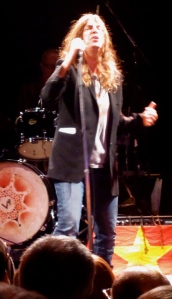 Patti Smith is just one of the artists who will perform for Haiti relief at City Winery. (Copyright 2010, Steven P. Marsh)

Will You Miss Me When I’m Gone? will be at the first of four nights of fantastic Haiti-relief. I’d like to make all four, but I’m not sure I have the cash (it’s $75 minimum,  but it’s worth as it’s for an important cause!) or the free time to do that. But everyone who cares about music and about the tragedy in Haiti should try to make it to at least one of these shows. It’s a great way for music fans to make a contribution.

The third night (Jan. 25) in particular, should be a great party given that U.S-based Tabou Combo (misspelled on the poster as Tambou Combo), one of the longest-running bands specializing in an irresistible Haitian dance music called compas (or konpa direk), is on the bill. I haven’t seen TC in years, but by all accounts it remains an amazing dance band.

City Winery’s goal is to raise $100,000 for Haiti relief over the four nights. Tickets ($75 general admission, $200 for Big-Hearted Donor tickets, which include a bottle of special wine) are tax deductible. Proceeds are being split among three charities: Wyclef Jean‘s Yele Haiti Foundation, Doctors Without Borders and Partners in Health.

Click here for more info and to buy tickets. As of this posting, it seems that tickets are still available for all four shows. Showtimes vary slightly from 8 to 9 pm, so check the time when you buy tickets. Unlike many City Winery shows, these shows are all general admission — although the $200 ticket will get you into the VIP area. My advice to you is to ignore your New York concert-going instincts to arrive late. If you want a good spot, arrive on time. Or even early! The good people at City Winery assure me that the kitchen will be open for all four shows, so you’ll be able to pass the time until the show starts with eating as well as drinking.