Why can’t we just love Fountains of Wayne for what it is? 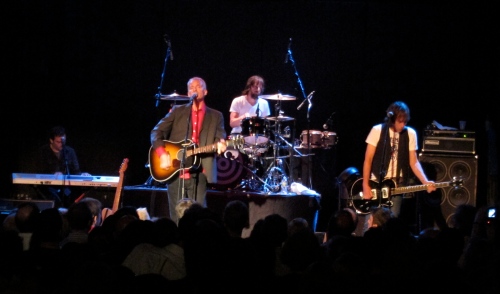 Weird that Fountains of Wayne, a band that crafts wonderful, highly relatable pop songs gets so much qualified praise and downright hate.

Well, I’m going on record to say, unapologetically, that after 15 years together FoW still knows how to rock.

Reviews of the band’s new album, their first for Yep Roc, have been mixed. I get the sense that a lot of reviewers feel guilty about unabashedly enjoying and recommending the music of a band that’s been around for 15 years and has made only five albums in that time.

Well, this is one band that knows how to put on a good show. So let’s just love them for what they are.

The band proved how well it still clicks when it played the Bowery Ballroom on Aug. 3, I figured FoW would be going heavy on new material, since the show was less than a week ahead of the release of  Sky Full of Holes. (It’s out today, and if you haven’t heard anything from it yet, you’re missing out on a wonderful collection of songs.)

To their credit, the band kicked off the set with two great old songs “Little Red Light” and “The Valley of Malls” before diving into the excellent, bittersweet new “Summer Place” and then returning to the back catalog for “Someone to Love.”

Frontmen Chris Collingwood, the band’s main singer, and Adam Schlesinger, the bass player (who you may know better through his work as composer of the Broadway musical Cry Baby or as a member of pop supergroup Tinted Windows), led the band on a romp through songs old and new, saving fan favorite “Radiation Vibe” with bits of other pop songs, including Paul McCartney and Wings tune “Jet,” into the mix before the final verse.

Lead guitarist Jody Porter showed off his individuality throughout the set, sometimes to the point of looking like he was somewhere else, perhaps in another band. He also made a point to take advantage of a loophole in NYC no-smoking rules that allow performers onstage to puff away.

Brian Young on drums (he also plays with the Pixies), kept time well, but stayed in the background, literally as well as figuratively. He never showed off or grabbed for the spotlight. He just bashed the skins, and quite well.

Nicole Atkins, a Neptune, N.J., native, opened the evening with a scorching set, accompanied only by her guitarist, the very talented Irina Yalkowsky. Nicole thanked Fountains of Wayne for inviting her to be part of Jersey Night at the Bowery Ballroom (in case you don’t know, Fountains of Wayne was a long-lived lawn-ornament shop in Wayne, N.J.), even though FoW isn’t really a Jersey band. 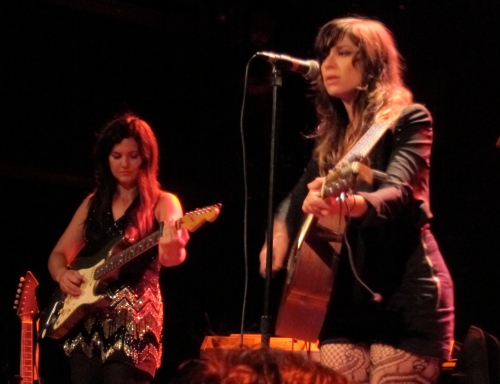 Crews were making the final preparations to Damrosh Park on Tuesday night for Wednesday's premiere of the 2010 edition of Lincoln Center Out Of Doors. (Copyright 2010, Steven P. Marsh)

The fabulous Lincoln Center Out of Doors festival starts Wednesday night with a bit of Civil Rights Movement street theater at 6:30 at Barclays Capital Grove (the sponsored name for the plaza between Lincoln Center Theater and Avery Fisher Hall and moves into full-bore music mode at 7:30 in Damrosch Park with Ethel Fair: The Songwriters.

Ethel is a string quartet like no other string quartet you’ve seen or heard. These four skilled players, who are quite active together and separately on the international contemporary music scene, have been working in collaborative mode over the past several years. Their latest project, which has its world premiere at the Lincoln Center Out of Doors festival,  features the quartet yoked with songwriters who are quite well known on their own. Pop tunesmith Adam Schlesinger (a member of pop bands Fountains of Wayne and Ivy and composer of Broadway’s “Cry Baby”), assisted by Mike Viola (Candy Butchers), has created a work with Ethel. Other collaborators include folk-blues dynamo Dayna Kurtz, punk-New Wave pioneer Tom Verlaine (Television) and folky Argentine singer-songwriter Juana Molina.

Ethel always pushes boundaries with its work. This collaborative effort appears to reach for a broader, more mainstream appeal than some of the band’s more left-of-center efforts, such as its ongoing TruckStop project, which takes the band on the road to work with and celebrate indigenous cultures. But it’s certain to provide a richly entertaining evening.

No Snakes In This Grass is the title of the theater piece, written by James Magnuson and directed by Mical Whitaker, that kicks off the evening. It’s a comedy set in the Garden of Eden that deals issues of race and the Fall.

This is just the first night of a jam-packed schedule of fabulous free music and performance art that runs through Aug. 15. For the full Lincoln Center Out of Doors schedule, read the press release after the jump. END_OF_DOCUMENT_TOKEN_TO_BE_REPLACED

Don’t miss Care Bears on Fire next Saturday (9/12) when they play one of their favorite venues, The Bell House in the ever-so-cutting-edge Gowanus neighborhood of Brooklyn. Singer-guitarist Sophie, drummer Izzy and bass player Jena may only be in their mid-teens — and dependent on their parents to drive them to shows and lug their gear — but their performance style and playing and writing chops belie their young age and relative inexperience. These girls can really rock.

Expect an audience for this early show (doors open at 5 pm)  like you’ve never seen at an NYC rock club for this set: everything from 5-year-olds to their grandparents. And don’t be surprised to find a music celeb or two in the audience. Last month, Fountains of Wayne‘s Adam Schlesinger (who worked with the girls on their new album Get Over It!) and his little girl were at CBoF’s show at Cake Shop on the Lower East Side.

BYS and Blame the Patient open.