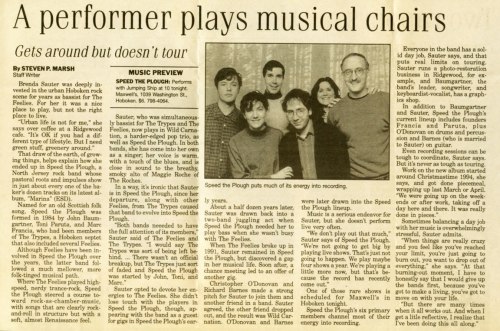 I have to call myself a latecomer to Speed the Plough.

Sure, I knew them in the 1990s, and in 1996 even interviewed then-members Brenda Sauter and Rich Barnes for The Record, the newspaper then based in Hackensack, N.J. But by then the band was already 13 years into its career.
for a long time.

So, mathematically at least, that makes me a relative newbie. But, like most bands in the extended family of The Feelies, Speed the Plough has gone through many changes in personnel and has continued to make new, and often quite loyal, fans, throughout its three decades. 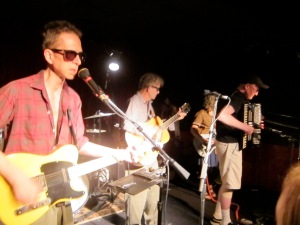 But this year, two years after its last album, STP is commemorating the three-decade mark with an album.  The Plough and the Stars, available for preorder now by clicking here, may be a box set, but it’s definitely no pine box ready  for burial.

STP has always marched to the sound of its own drummer (now, and often, a Demeski!), with its somewhat pastoral sound. But it’s also never stopped moving forward, however incrementally at times.

Sure, The Plough and the Stars features a 17-song retrospective disc, a live radio appearance from 1993 and a booklet full of reminiscences from band members from all eras along with friends of the band (yours truly included).

But there’s also the forward-looking “Tag Sale” disc of six new tracks — a small but significant collection of new songs.

The album, on Hoboken’s Bar/None label, is due out Sept. 17.

While STP’s lineup has changed over the years, the husband-and-wife team of John Baumgartner and Toni (Paruta) Baumgartner have been at the heart of the band. The band’s latest incarnation also includes Cindi Merklee, Ed Seifert, John Demeski and Mike Baumgartner.

The band also is playing a free show, along with The Feelies, at the Hoboken Arts & Music Festival, a hugely popular annual event that runs from 11 a.m. to 6 p.m. on Sunday, Sept. 29.

It should be full of surprises. Here’s how Speed the Plough puts it on the band website:

We’ll have a few special guests as we dust off a few of the older songs on The Plough and The Stars. Also on the bill are the mighty Stuyvesant. More details about set times, etc. to follow shortly.