The Feelies’ final Fourth of July at Maxwell’s 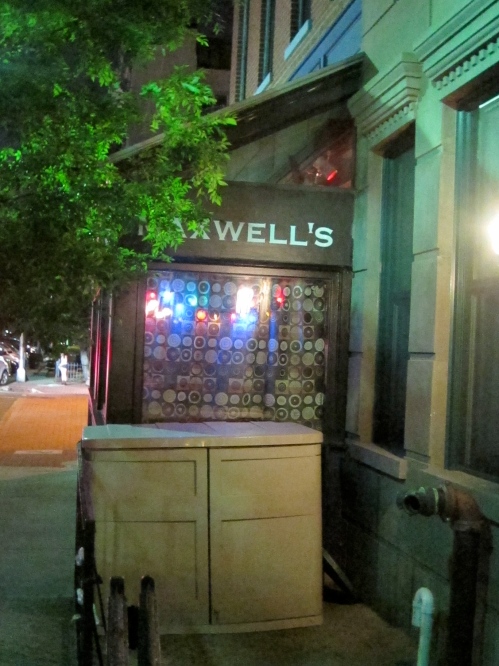 It’s always a tough, emotional thing to get to Maxwell’s in Hoboken, N.J.,  for The Feelies‘ annual Fourth of July show. You’re fighting for access to the Mile Square City with thousands trying to get to the waterfront to watch the Macy’s fireworks show in Manhattan.

But the Fourth of July 2013 was particularly tough, even with showtime pushed back to the throwback hour of 10 p.m. (Remember when rock shows didn’t really get started until nighttime had really settled in?)

It was the very last Independence Day that The Feelies would be playing the venerated Maxwell’s music club.

For fans and newbies alike, the night — the first of the band’s three-day holiday stand — was a touching one. 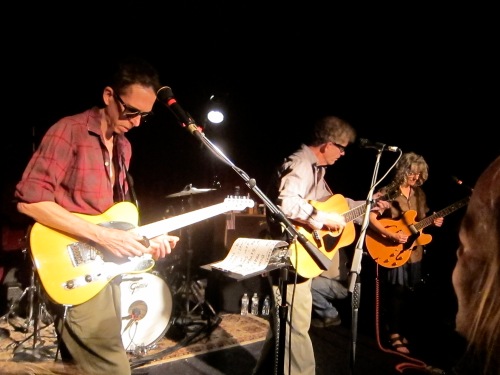 For their part, members of the band — Glenn Mercer on guitar, Bill Million on guitar, Brenda Sauter on bass, Stan Demeski on drums and Dave Weckerman on percussion — didn’t get maudlin and sentimental. They just did what they always do, playing a solid, well-planned set of crowd favorites, mixing their own turns — the older, nervous one and the new, slightly more melodic numbers — with a bunch of rock covers that they’ve added to their bag of tricks over the years.

They brought up a longtime friend and associate, John Baumgartner (of The Trypes and Speed the Plough, and also involved in a graphics business with sister Janice Demeski), to join them on “Bluer Skies” early in the evening.

They ended with three encores, featuring a surprise guest in the first set: Glenn Morrow, a longtime partner in Hoboken’s Bar/None Records and a member of Hoboken heyday bands like The Individuals, Rage to Live, and A, the band that later morphed, without Morrow, into The Bongos. Morrow joined The Feelies for The Monkees hit “I’m a Believer” and the Feelies favorite Beatles track, “Everybody’s Got Something to Hide Except Me and My Monkey,” to cement the simian theme.

There were no surprises. But that’s not what Feelies fans want at the band’s shows. They want the satisfaction of a rock-solid set of favorites old and new. And that’s what they get.

And that’s a better tribute to the soon-to-be-gone club than a bucket of salty tears and maudlin speeches could ever be. 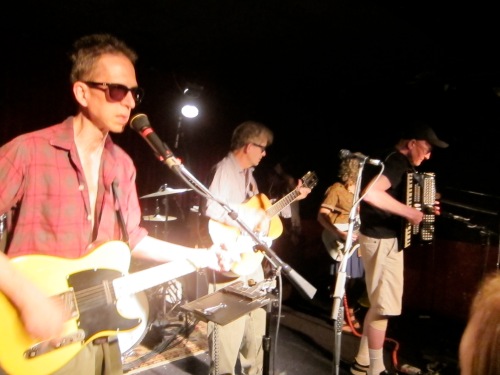 John Baumgartner, of Speed the Plough and The Trypes, and brother-in-law of Stan Demeski, joins The Feelies on accordion. 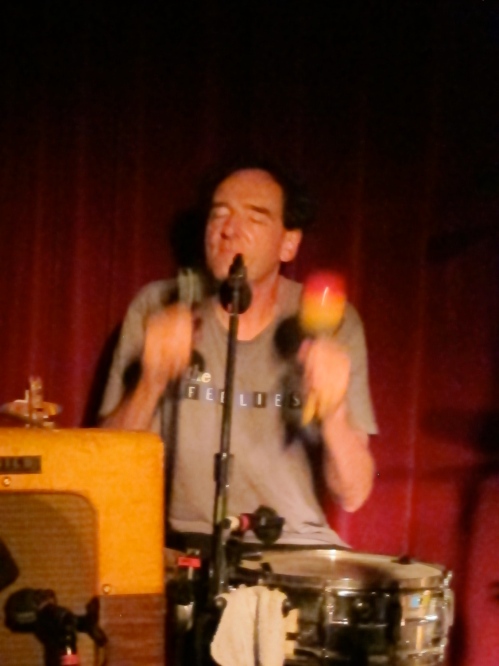 This entry was posted in Music, News, Pop and Rock, Review and tagged A, Bar/None, Bill Million, Bluer Skies, Brenda Sauter, Dave Weckerman, Everybody's Got Something to Hide Except Me and My Monkey, Glenn Mercer, Glenn Morrow, Hoboken, I'm a Believer, John Baumgartner, Maxwell's, Rage to Live, Speed the Plough, Stan Demeski, The Beatles, The Bongos, The Feelies, The Individuals, The Monkees, The Trypes. Bookmark the permalink.