The funny thing about Brian Wilson, the man who masterminded the Beach Boys, is that he doesn’t look like he really cares all that much about his legendary surf-and-sun band’s music.

Sure, he’s got all the moves down, gives the heavily scripted introductions you’d expect. He was pretty much the picture of a legendary bandleader when he brought his act to Manhattan’s Highline Ballroom in Manhattan on Sunday, June 12. But he had that faraway look in his eyes. 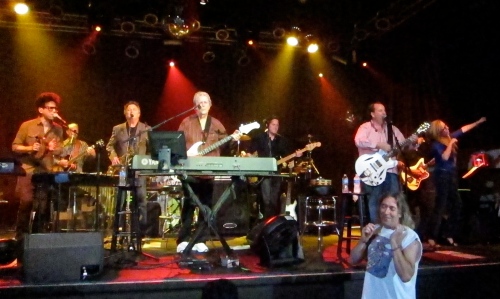 Brian Wilson and his band.

But for the first half of the show, Wilson and company performed spirited versions of a hit parade of Beach Boys classics, include “Good Vibrations,” “Heroes and Villains,” “Sloop John B” and “God Only Knows.”