The Feelies gear up to play 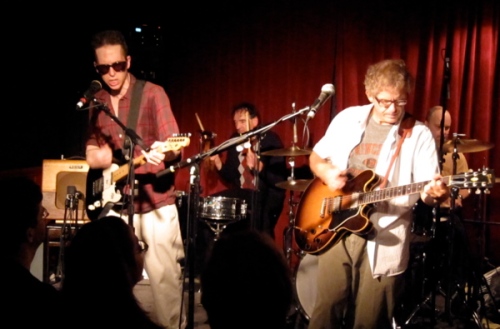 Now who could possibly know better what The Feelies are up to than the daughter of one of the band members? (Well, maybe her dad, but don’t tell her that!)

With that in mind, I reached out to the delightful Katie Demeski, daughter of the great New Jersey band’s drummer Stanley Demeski and his wife Janice. One of Katie’s blogs, How Strange, Innocence, is a leading source of reliable information about what the band is up to. It’s not the quantity so much as the quality of her information that makes the blog worth checking.

But a day or two ahead of the release of Here Before, the band’s first new album in 19 years, I checked in and realized she hadn’t blogged about The Feelies since last Sept. 8, when she reported the band was going into the studio. Granted, she’s in college and holding down a job, so it’s not like she has a ton of free time.

Luckily, when I messaged her, she was just about to do a quick update. It’s live on her blog now, with pretty much everything you need to know about their upcoming shows, plus some info about Speed the Plough, a band that’s part of The Feelies’ extended family. .

Suffice it to say The Feelies aren’t in any huge hurry to hit the road simultaneously with the release of their album. In fact, the band’s first public show (not counting a students-only gig this month at SUNY Purchase) comes at The Bell House in Gowanus, Brooklyn, on May 13, a full month after the album’s release! That show, not surprisingly, appears to be sold out.

Please go to Katie’s blog for more details, including some tantalizing information about an outdoor gig in Brooklyn. I don’t want to spoil it for you.