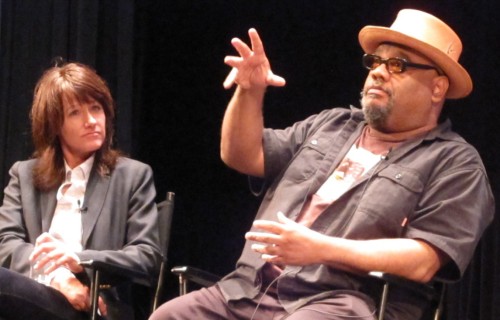 Stew, the singer-songwriter who fronts The Negro Problem and wrote the hit musical Passing Strange with musical partner Heidi Rodewald, makes much of his testy relationship with Broadway.

In fact, he makes specific reference to it in one of the newer Negro Problem tunes. He repeats, with great emphasis, “thank God I’m off Broadway.”

Thorny relationship notwithstanding, Stew and Heidi return next season to the scene of the crime, the place where Passing Strange took root and flowered: New York City’s Public Theater. Their new show, titled The Total Bent, is set for its world premiere on Feb. 14, 2012.

It’s no surprise that The Total Bent is a story about a musician. (Full description after the jump.) After all, Passing Strange was that, although it had a biographical arc that the promised new show appears to lack.  (I wonder if they’ve actually started writing yet? They tend to be very deadline-motivated.)

The Strange pair are working with director Joanna Settle, who forged a deal with them to direct a show at The Public around the time Passing Strange was ending its Broadway run.

Stew and Heidi have been involved in Settle’s creative process for a couple of years, writing music for her Shakespeare on the Sound outdoor productions for the last two years.

Granted, a show at The Public doesn’t give Stew and Heidi a guaranteed ride on the Broadway Limited, but the odds are decent. We shall see.

Click through to the jump for details about the show.