Glenn Branca to perform in NYC this Saturday 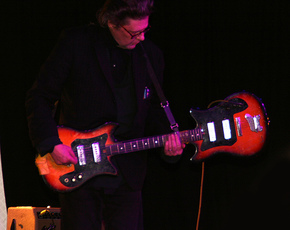 Branca, who composes for orchestra as well as his own ensemble has been a big influence on a number of guitarists in the avant garde wing of rock music. Thurston Moore and Lee Ranaldo of Sonic Youth and Page Hamilton of Helmet are among Branca’s disciples and played in his ensemble.

The show also is the official release party for the DVD of Ericka Beckman‘s No Wave film 135 Grand St. 1979, which will be screened. It includes the only extant footage of two of Branca’s earlier ensembles, Theoretical Girls, The Static, along with shots of a number of other bands of the period.