The Bill Murray Experience: No, not that Bill Murray, but quite an experience! 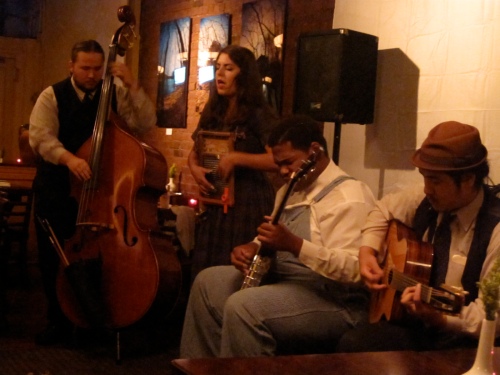 Will You Miss Me When I’m Gone? knew nothing about The Bill Murray Experience until a couple of days ago, when the old-timey New York City based band was featured in this New York Post video about Play Me, I’m Yours, the art project that has put 60 pianos — available for anyone to play — in public places around New York City.

But it was love at first sight — and sound! Singer Jessy Carolina has an amazingly bluesy voice and her bandmates — Horatio Baltz on lead guitar, Jay Sanford on upright bass and the irrepressible Blind Boy Paxton on banjo — provide the perfect setting for it. It’s a new generation tackling early American roots music, jazz and pop standards from the late 19th and early 20th centuries. It’s repertoire that has been a rich source over the years for artists like Leon Redbone, with tunes like “My Melancholy Baby” and “I Ain’t Got Nobody.”

How we’ve missed them is a mystery. They are fantastic, and proved it last night in performance before a small and not entirely attentive crowd at The Cupping Room Cafe at West Broadway and Broome streets in Manhattan’s Soho neighborhood.

Peter Stampfel, of Holy Modal Rounders fame, knows a thing or two about this kind of music. And he sums up the band’s primary appeal quite well — it’s Jessy’s emotive and engaging singing. “She doesn’t sing songs as much as she embodies them. Her singing and moves are both about as good as it gets,” Stampfel says.

But Jessy needs the rest of the band to pull it off. Her interplay with the players — especially the jovial, overall-wearing Paxton — is charming adds so much to the overall feel of the performance.

Here’s a clip of the band that gives you great sense of its joyous, freewheeling style at a June 20 show at the Main Street Museum in White River Junction, Vt.

Of course any band that takes Bill Murray’s name in vain has to evoke Murray’s spot in Jim Jarmusch’s 2003 film Coffee and Cigarettes. Remember “Bill Groundhog Day, Ghostbustin’ ass Murray”? How could you forget? We’ll leave you with that:

Bang on a Can Marathon: 12 hours of free music tomorrow 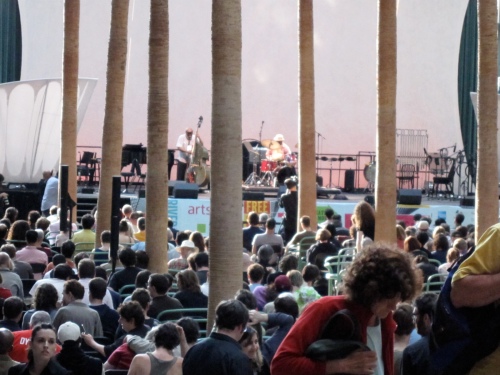 The Bang on a Can Marathon, one of the highlights of the New Music scene in New York City, is tomorrow. Don’t miss it.

It’s the perfect way to spend a summer Sunday, sampling new music and taking in the sights and sounds of  Battery Park’s waterfront. You can come and go as you please in the climate-controlled Winter Garden, and you don’t even have to leave for a meal, because many of the Winter Garden restaurants will remain open throughout the performance.

Among the acts featured throughout the day are Vernon Reid, perhaps best known for his involvement in Living Colour, Signal ensemble and the fantastic Burkina Electric. But there’s plenty more to hear, see and do throughout the 12 hours.

Scroll down or click here for the full schedule and details in a previous Will You Miss Me When I’m Gone? post.