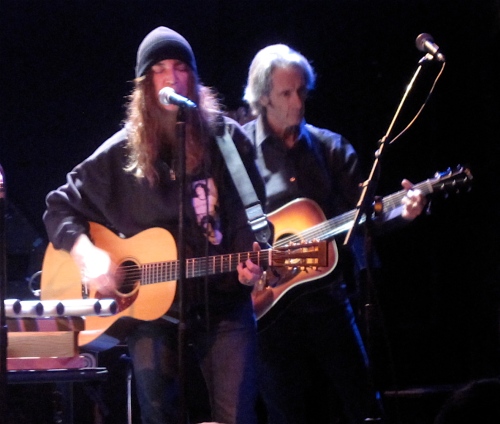 Patti Smith and longtime collaborator Lenny Kaye kick off the the first of her 2009 New Year's shows with an intimate version of "Southern Cross." (Photos copyright 2009, Steven P. Marsh)

Patti Smith assured the sold-out crowd at the Bowery Ballroom last night that 2010 is going to be a better year. Not a perfect one, maybe, but better than 2009. And I think I can safely speak for the crowd when I say I sure hope she’s right. She reminded us that we’re having a blue moon this New Year’s Eve, and suggested it’s a sign of good luck.

Patti shows off a copy of her new book, Just Kids, at the beginning of last night's show.

Patti, who turned 63 today, kicked off her annual New Year’s run at the Bowery last night with a reading from her new book about her friendship with Robert Mapplethorpe, Just Kids, which is due out Jan. 19. She wandered onstage wearing a knit cap and a heavy black hoodie snatched right from her merch table because it was so cold backstage — and outside — last night.

“I just got it on my way here tonight,” she told the crowd with her crooked smile. “It’s not like I’m trying to do a commercial. I’m just excited. … (But) I know you can’t download it. It was a bit about her first days in New York back in 1967, a perfect vignette.

The evening quickly, but briefly, turned bittersweet as she memorialized three like-minded artists who died this year — including rock poet Jim Carroll and singer-songwriter Vic Chesnutt — by performing a beautiful acoustic version of Southern Cross with help from her longtime guitarist Lenny Kaye.

After a round of applause, Patti surrendered the stage to daughter Jesse Smith, who said not a word during her 25 minute piano ramble, accompanied by drums. glockenspiel and tubular bells. Jesse seems to be a competent player, but is visibly uncomfortable and uncertain onstage. Every time I see her perform, I wonder why she’s up there. Unlike her brother Jackson, who did not play guitar with his mom’s band last night as he often does, Jesse does not give the impression that she was born for the stage.

Jesse Smith and her band was the first-night opener.

Later, Patti reminded us that “Lenny Kaye played in Jim Carroll’s band. I did other things with Jim,” as she introduced Lenny for a version of Jim’s Still Life. That one drew a laugh. It was the first of two songs the band did without Patti – the second being a Tony Shanahan-led cover of Powderfinger in honor of Vic Chesnutt.

There were plenty of other charming moments and laughs throughout the evening as Patti plowed through at least one song from just about ever album. And even though she told the crowd she was still fighting the residue of illness, she sounded great and never faltered — except when she forgot the words to songs from time to time as she inevitably does at every show.

Tony Shanahan joins Patti on Baby, It's Cold Outside.

Patti and the band did a remarkable cover of Michael Jackson’s Billie Jean, before she Shanahan did a delightful role-reversal duet with Frank Loesser’s 1944 Baby, It’s Cold Outside. The final treat of the evening was a raggedly spirited rendition of Love Train. (Thank goodness Tony was always right there to prompt Patti on the lyrics, though!)If you can’t be a tonight’s show, but are near a TV set, be sure to catch the PBS premiere of a Steven Sebring’s new documentary, Patti Smith: Dream of Life. (Patti told the audience last night to be sure to watch the segment about her mother.) The documentary, filmed over 11 years, airs in New York at 9 o’clock tonight on WNET, Channel. 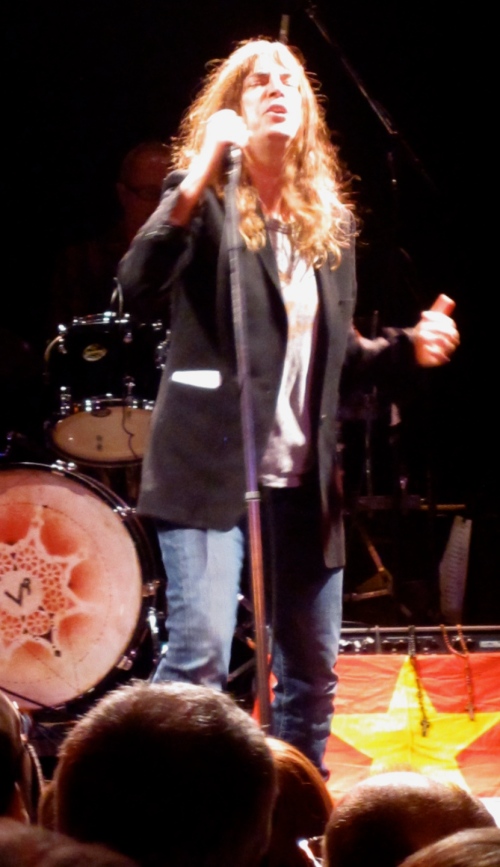