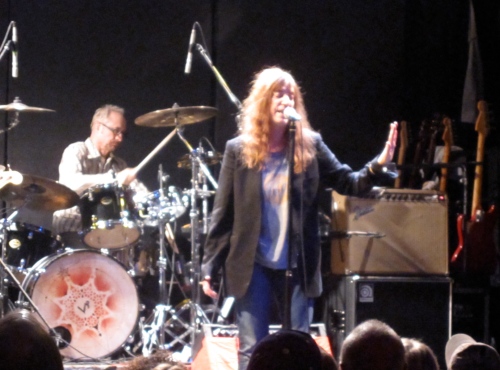 Patti Smith was still as giddy as a little girl last night, for the second of her three New Year’s shows at The Bowery Ballroom. She had reason to be happy — it was her 63rd birthday, or “burfday,” as she so charmingly says it.

But, unlike the first night, Patti brought a bit more snarl and a lot  more focus to the show. (She mentioned that The New York Times said she did some “bad things” on the first night. Check out that review, by Ben Ratliff, here.) The only slight disappointment last night was that the set list largely repeated the first night’s set. It was a spirited evening, though — good enough to make me regret my decision to skip tonight’s show to avoide the craziness of a Manhattan New Year’s Eve.

It didn't look like there were 63 candles on the cake that Jesse Smith brought onstage for her mom. But who's counting!

The evening had a few surprises. For me, the best came when James Mastro of Hoboken’s The Bongos, resplendent in a red hat, materialized onstage to assist on a cover of Neil Young’s Powderfinger. Last night’s version was much stronger than the opening night’s tepid effort, and Mastro’s professional attitude, great guitar work and solid vocals made a huge difference. (It would have been helpful if somebody had bothered to introduce James when he came onstage. While plenty of people in the audience recognized the local hero, his name wasn’t announced from stage until after he was done playing.)