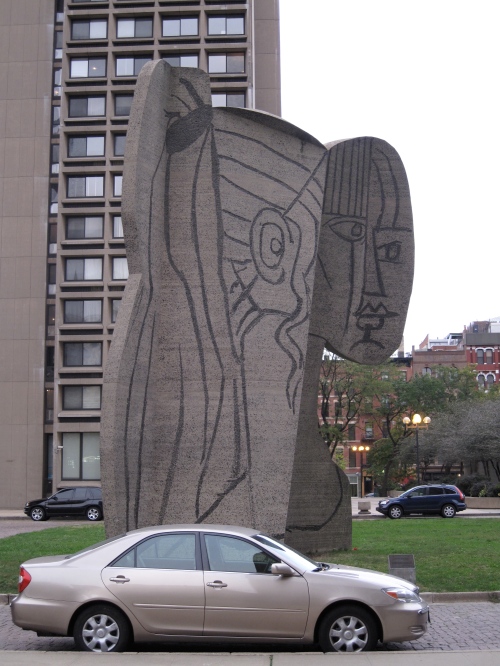 This giant version of Picasso's "Bust of Sylvette" sits in the midst of three NYU towers in Manhattan's West Village.

If you are a New York University alumnus, you probably know that there’s a huge reworking of a Picasso sculpture in the courtyard of Silver Towers (University Village) on Bleecker Street, just south of Washington Square Village. But if you’re not, you probably haven’t noticed it, even if you’ve walked along the block many times. 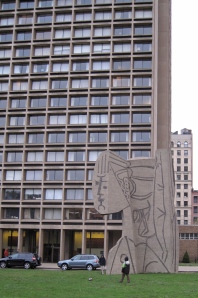 It’s an enlargement of Pablo Picasso‘s “Bust of Sylvette” (1934), executed on a huge scale by in 1967 Norwegian sculptor Carl Nesjär.

It’s not exactly a secret, but unless you live there or spend a lot of time in the neighborhood, you might have missed it. It’s not obvious from the street, as trees have grown over the years to block the view.

But the open courtyard amid the three 32-story towers (mostly used for NYC faculty housing) is a beautiful little space for the rather surprising artwork.

I’ve seen the gigantic work many times, but only recently was moved to stop and investigate it and take a few photos. It provides a moment of surprise and delight in an otherwise rather antiseptic and soulless modernist space.

Be sure to check it out the next time you’re in the neighborhood.

One response to “Hiding in plain sight: Picasso in New York City”