We don’t mind change. We may grow to love a band’s sound, but if it never evolves, a band can quickly becomes a parody of itself.

The Dough Rollers started off in 2008 as a high-concept conceit cooked up by two celebrity kids. Malcolm Ford (son of Harrison Ford) and Jack Byrne (son of Gabriel Byrne and Ellen Barkin) bonded over the love of old blues music, and started playing together. Their act — two guys in sharp, retro outfits, hair slicked back, etc. — tried to replicate the classic sound of the blues. While the two of them were the core of the group, they often had fiddle-vocalist Julia Tepper as a co-conspirator. (She joined them on their first, and so far only, album, the self-titled disc.) 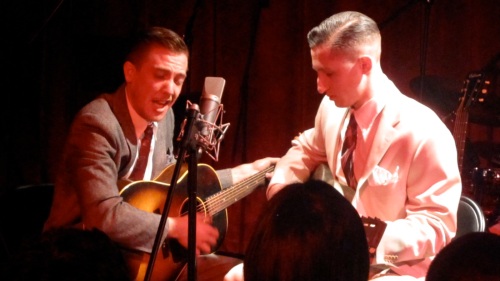 Few acts could sustain the conceit. Leon Redbone is the only one that springs to mind at the moment, and his whole performing life is in character.

Click through to the jump for more photos and info. END_OF_DOCUMENT_TOKEN_TO_BE_REPLACED