I’m trying something new by posting info from time to time about upcoming shows that are really worth checking out. (If I get really organized, I’ll try to do this on a regular basis — at least once a month.) I’m keeping them short, but I’m including info and links so you can pursue these opportunities with ease. 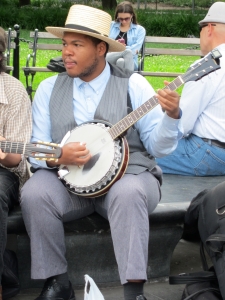 If you read the Village Voice, you probably saw the recent cover story about the authentic young bluesman Jerron “Blind Boy” Paxton. I first saw Paxton as a member of Jessy Carolina & The Hot Mess (known at the time by the much funnier name the Bill Murray Experience). It was — and still is — a great band, and Paxton was only one of many memorable things about it. While Paxton is getting a helluva a lot of exposure as a solo artist, he’s still listed as a member of JC&THM. (Oddly, the Voice piece doesn’t even mention his association with the group, which I’ve seen at small venues like the Cupping Room Cafe and in Washington Square Park. Also, the Voice cover photo is flopped, making Blind Boy appear to be a left-handed player when he’s most assuredly right-handed. I’m not sure I can blame the Voice for the flop, though, since another photo that appears to be from the same shoot is on Blind Boy’s Facebook page, depicting him as a left-handed banjo player. And given that it has the photographer’s credit on the image, it must have been the shooter’s choice.) 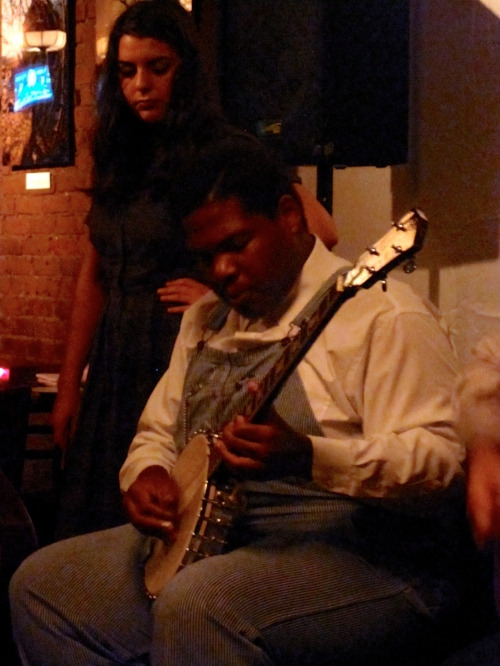 Jessy Carolina and Jerron “Blind Boy” Paxton in 2010, when the band was still known as The Bill Murray Experience. (© 2010 Steven P. Marsh/willyoumissme.com)

If Paxton appears with the band at Terra Blues on Feb. 28, I’ll be thrilled, but I won’t be disappointed if he doesn’t. He’s a prodigious talent, but he’s just one of the band’s great talents. The band plays old-timey American pop and jazz and does it well. It’s been awhile since I’ve seen this band, so I’m really looking forward to this show. (I realize now that the six-string banjo he’s playing in my photos will offend purists, but I’m guessing that was for convenience, as he also plays the more traditional five-string model, though I’m not sure whether he has a four-string version.)

Jessy Carolina & The Hot Mess play at 7 p.m. Saturday, Feb. 28, at Terra Blues, 149 Bleecker Street, Manhattan. The club charges an entrance fee that lets you stay all night. Table reservations are available from 6-8 p.m. After that, it’s first-come, first-seated. For more info about making a reservation, tap or click here.

BLOG BONUS: If you want to be sure to see Paxton in action, you can do it on Friday, April 17, at the 7th Annual Brooklyn Folk Festival. Tap or click here for more information on that three-day program.

This mellow singer-songwriter is a native of Richmond, Virginia. He made a big splash in 2012 with his first album as a leader, “Big Inner.” He’s got a great baritone voice and a sort of happy stoner affect, which adds a dreamlike aspect to his musical storytelling.

His new album, “Fresh Blood,” drops on March 10. But he’s having an album release show at BRIC House (next door to the BAM Harvey Theater) a week earlier, on March 3. Last I checked, tickets were still available. He’s performing with a 30-piece orchestra, which should really show off his work in a whole new way. I’ve listened to the new album once already, and it’s at least as strong as the last one. So this is going to be a great show.

Here’s a video of a song from the new album:

This one’s a real nostalgia trip — imaginary nostalgia, I guess, for someone like me, who never saw The Cowsills back in the day. (I have seen Susan Cowsill a number of times, solo and in the wonderful Continental Drifters, however, so it’s not as if I have no Cowsills experience whatsoever.)

The band’s first hit  “The Rain, The Park & Other Things,” was on the 1967 debut album. The Cowsills also inspired TV’s “The Partridge Family.”

The Cowsills are scheduled to play a 50th Anniversary reunion show at the Cutting Room in NYC in April.

Two of the original performing Cowsills are dead (Barry died during Katrina, and Bill died of an illness around the same time), but this lineup of 7 still has 5 members with the family name, plus drummer Russ Broussard, who’s performed with Susan Cowsill for years and married her after her divorce from Peter Holsapple. 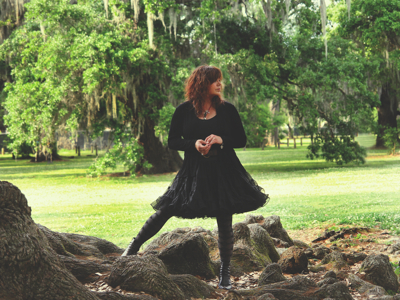 I’m sitting here wondering why I don’t have any photos of Susan Cowsill.

Even before starting this blog, I often took photos at shows to create lasting memorabilia. I’m not sure if I’ve even seen her since 2009, when this blog started. I know I saw her at least once on her own in New York, after catching her perform numerous times with her old band, the late, lamented Continental Drifters.

She and her lusty, raggedly-pushed-to-the-edge vocal style will be back in New York in October, when she opens a Barclays Center show for Rodriguez (aka Detroit-based 1970s singer-songwriter Sixto Díaz Rodríguez), who rediscovered the spotlight via the award-winning 2012 documentary Searching for Sugar Man. END_OF_DOCUMENT_TOKEN_TO_BE_REPLACED