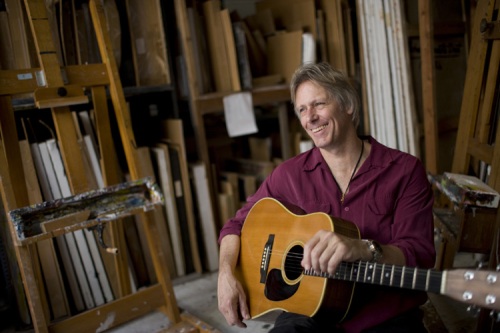 It’s nice to meet a rock musician like Jon Pousette-Dart who’s really in it for the long haul. He’s been playing music since he was a young boy in Suffern, N.Y.

Jon, who continued to tour and play even when the major-label spotlight shifted away from him in the early Eighties, tells Will You Miss Me When I’m Gone? what keeps him going:

“I do it because him have to do it. It’s kind of who I am,” Jon. And while Jon is clearly a smart guy, who no doubt would be successful at almost anything he might tackle, he modestly suggests he has little choice of vocation because “I don’t know if there’s anything else I could do.” 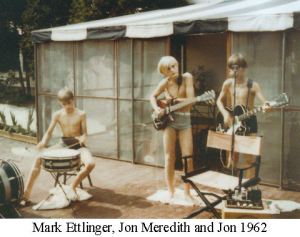 Evidence from Jon's scrapbook shows he was playing music in 1962, when he was about 10 years old.

Jon, the son of Abstract Expressionist painter Richard Pousette-Dart, began playing musici with friends when he was quite young, even forming a band  called Tony and the Tigers with Tony and Hunt Sales, sons of TV comedian (and neighbor) Soupy Sales. (The Sales boys later comprised the rhythm section on Iggy Pop‘s classic album Lust for Life, before becoming part of David Bowie‘s Tin Machine.)

“I knew even when I was a kid that this was what I was going to be doing,” says Jon, a self-taught guitarist who learned most of his chops from his older sister’s record collection. “It’s always been about being in music for the long run.”

In 1973, Jon formed the Pousette-Dart Band (PDB for short), and quickly was signed to Capitol Records. PDB brought bring Jon’s warm voice to bear on a string of countryish folk-rock tunes like “Amnesia” and a cover of the 1961 rock standard, “Stand By Me.” PDB’s sound was cheeful, bright and overall a little less polished than similar work by the Eagles, James Taylor or even Orleans, another band with New York roots. PDB was perfectly positioned as an alternative to the over-hyped sound of some of the big artists of the day.

The band broke up in 1981, but Jon has continued to perform, as a solo artist and with bands, ever since. He’s managed to stay afloat while dealing with huge changes in the music business. All while, Jon says, his approach to making music remains pretty steadfast. “It really hasn’t consciously changed, it has organically evolved. Over time, you become open and receptive to other things. But I was kind of rooted in roots, blues and rock-and-roll.” And even though he’s a Northerner (born in New York City in 1952, and a resident of its northwestern suburbs on and off for much of his life), he has a deep affinity for the South. “Almost everything I’ve drawn from, musically, is from down South. There’s a real layer of depth in the South.”

The one thing that has changed is Jon’s writing habits. “When I was starting out, I  wrote everything on my own. But then in the early Nineties, my manager brought me to Nashville and got me started collaborating. I really enjoyed that. It opened up a whole new perspective.”

Jon is still actively recording (a new album is due later this year) and playing shows. “Live performance is invaluable to a songwriter. It’s part of the process. You start to play a song out and it shifts and changes.” But finding places to play is the tough part in a market that Jon calls “oversaturated” with bands. So he’s thrilled to be bringing his sound back home to Rockland County with a gig in Piermont tomorrow and in Nyack next month.