Mother Falcon will fly into your heart, head and ears

I’ll admit that I’m a little late to the party where Mother Falcon is concerned.

But I knew I’d fall in the love the minute I started checking out the orchestral pop band’s music on the recommendation of a friend — somebody who’s more often asking me for bands to check out. 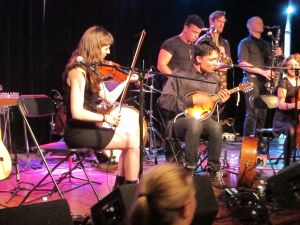 It didn’t take long for the upbeat, passionate sound to reel me right in.

But I learned at Littlefield in North Slope, Brooklyn, last night that their recordings pale in comparison to their live performances. There were 12 members of Mother Falcon (the band, always big, varies in number as I understand it) on Littlefield’s generous stage. Every one of the players obviously put heart and soul into the set. END_OF_DOCUMENT_TOKEN_TO_BE_REPLACED