Puss ‘n’ Boots rings in the holidays in spectacular style 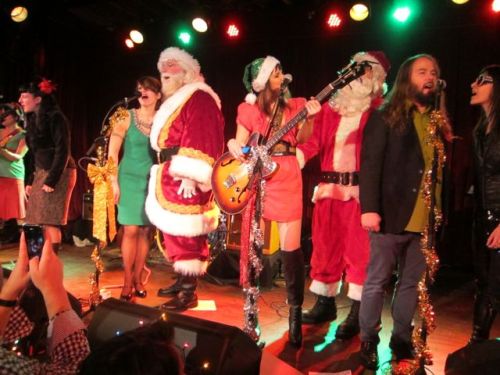 Santa joins Puss ‘n’ Boots and guest for the onstage finale at The Bell House. (All photos © 2013 Steven P. Marsh/willyoumissme.com)

I remember my first time with Puss ‘n’ Boots — the supergroup comprising Norah Jones, Sasha Dobson, and Catherine Popper. It was January 2010, when they were part of a Doveman and Friends show at the Mercury Lounge. 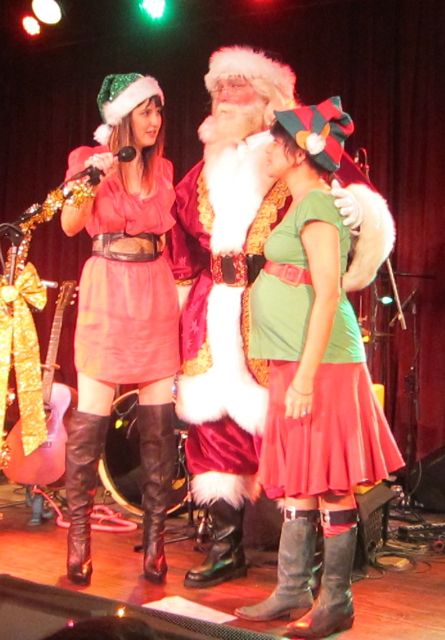 There’s no doubt about it, Norah Jones is pregnant.

They seemed like they were having a lot of fun that night, but they were crazy sloppy, stumbling, playing in different keys, and generally just seeming a little too loose. But it was nice to see Norah, especially, in one of her many side projects where she isn’t the “star,” but just a player. 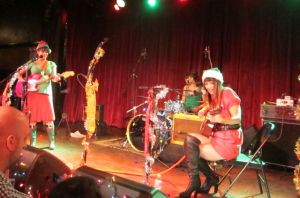 As always, Puss ‘n’ Boots didn’t spare the vagina jokes, especially when Catherine Popper sat down to play in her very short dress.

I’ve seen them a couple times since then, and my impression was the same: fun but too sloppy.

I expected more of the same from the 2013 Puss ‘n’ Boots Xmas Spectacular at The Bell House in Brooklyn on Wednesday night. I almost skipped it because I wasn’t expecting a particularly good show, but figured that with their special guests it would at least be a festive diversion.

The ladies of Puss ‘n’ Boots know how to throw a holiday party.

Check out more photos after the jump. END_OF_DOCUMENT_TOKEN_TO_BE_REPLACED