In the Heights headed to the silver screen 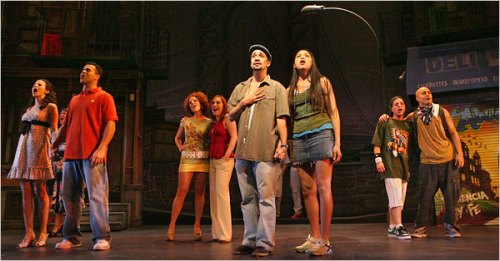 Lin-Manuel Miranda (center, wearing cap), who created and composed In the Heights, is set to reprise his starring role as Usnavi in the big-screen version.

The New York-themed hit Broadway musical In the Heights will follow in the cinematic footsteps of its contemporary, Passing Strange, with a film adaptation.

The Hollywood Reporter says the movie will be directed by Kenny Ortega, the director of the High School Musical movies and Michael Jackson’s This Is It. No dates have been announced.

Lin-Manuel Miranda, who created and composed the show about three days in the lives of neighbors in NYC’s Washington Heights section, is starring and producing the movie. Quiara Alegria Hudes, who wrote the book for the musical, is writing the script. Lin-Manuel originated the starring role of Usnavi in the off-Broadway production, and opened in the show when it transferred to Broadway.

In keeping with a trend on Broadway, a movie star — Corbin Bleu of High School Musical — is set to take over the show’s starring role starting Jan. 25.

In the Heights was nominated for 13 Tony awards in 2008, and won for best new musical. Passing Strange got seven 2008 Tony nods, and won best book of a musical.

This is just the latest parallel between theatrical classmates Heights and PS, both of which were staged off-Broadway to great acclaim in 2007 and transferred to Broadway in 2008. NYC-themed Heights won the East Coast-West Coast battle against PS, which tells the story of a black man growing up in Los Angeles. Heights, which had its first Broadway performance a week after Passing Strange transferred, remains open, while PS closed on July 20, 2008, after 186 performances during a six-month run.

Director Spike Lee, a Strange Freak (a term used to describe the most devoted Passing Strange fans), filmed the final performances of PS. His film — a relatively low-buget record of the stage show with few grand cinematic tricks — was released earlier this year. The Heights movie is being billed as an “adaptation,” which suggests a slicker, big-budget project complete with location shots. Heights struck me from Day One as an updated West Side Story, and this approach to making the film seems likely to underscore the comparison.