Maggie Roche, the eldest of the three folk-singing sisters from Bergen County, New Jersey, who performed as The Roches, died Saturday morning.

Maggie, who always seemed like the sensible, quiet sister, was 65 when she lost her battle with cancer.

Younger sister Suzzy Roche confirmed the death in a loving Facebook farewell, saying she and Maggie spent  “the last month and a half helping each other through her final journey.” 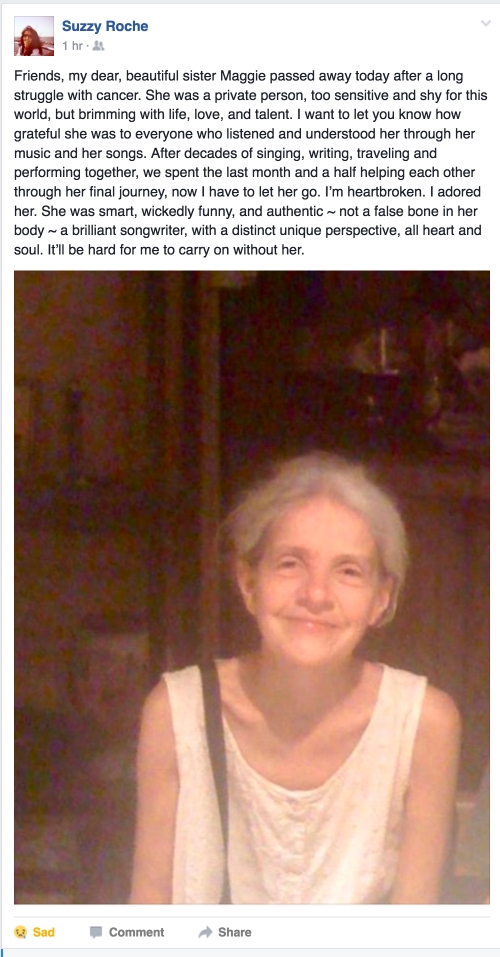 The Park Ridge-born-and-raised sisters — Maggie, Suzzy, and middle sister Terre — started singing together as children in the late ’50s. At some point they started performing Christmas carols on the streets of New York City. That tradition eventually became an ongoing project involving other musical friends under the umbrella of the Carolling Carollers.

Maggie and Terre  released the first Roches album, “Seductive Reasoning,” as a duo in 1975, with the help of Paul Simon, who used the pair as backup singers on his third solo studio album, “There Goes Rhymin’ Simon,” released in 1973.

Suzzy joined her sisters 1979’s “The Roches,” and they continued as a trio for many years.

I encountered The Roches that same year — on the Nov. 17 episode of “Saturday Night Live:” — when they shared their earnestly nerdy, hyperactive version of Handel’s Hallelujah Chorus.

This is the performance that single-handedly changed my perception of folk music forever:

Here’s a live performance at The Capitol Theatre in Passaic, New Jersey, a year before the “SNL” appearance:

And here’s how their performance style had evolved on the Hallelujah Chorus by 1982:

For a good chuckle, check out this amazingly dated but lovely video of 1989’s “Big Nuthin'”

Maggie had been performing only sporadically in the last quite a few years, while Suzzy and Terre continued with their own projects, including Suzzy’s duo with daughter Lucy Wainwright Roche, who often stayed with her grandparents in Suffer, New York, who lived around the corner from me at the time.

It appears that Maggie was still performing as recently as four or five years ago, though I had not seen her in quite a few years.

The last major project I recall her being involve with was  “Zero Church,” an album she and Suzzy made with the help of many other artists and released in November 2001. It was also performed at St. Ann’s Warehouse in Brooklyn in April 2002, which was co-produced by current HERE Arts Center Producing Director Kim Whitener.

Our condolences go out to Suzzy, Terre, Lucy, and all members of the extended family.